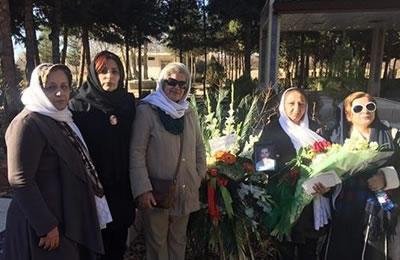 A group of mothers of victims of the 2009 uprising held a ceremony on Friday, December 16, 2016, to commemorate Mostafa Karimbaigi on the seventh anniversary of his martyrdom in Tehran’s uprising. The ceremony was held in advance to avoid security threats.

Mothers of the victims, the family of Mostafa Karimbaigi, and human rights activists attended the ceremony.

Mostafa Karimbaigi was shot in the head and killed by security forces on December 27, 2009, in the course of an uprising which demanded overthrow of the clerical regime. His body was buried without his family’s information somewhere outside Tehran. The Karimbaigi family had no information on him until they found his picture in the coroner’s office at Kahrizak.

Following up on their children’s demand, the mothers of victims of the 2009 uprising hold ceremonies and champion the Iranian people’s freedom-loving movement.