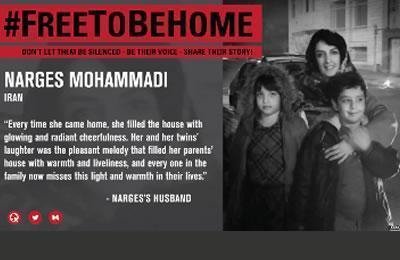 Iran: US Ambassador to UN calls for release of Narges Mohammadi

Samantha Power, the United States Ambassador to the UN, launched a #FreeToBeHome Political Prisoner Campaign on the International Human Rights Day in which she called for the release of political prisoners in ten countries, saying, “These prisoners represent thousands of other prisoners unjustly detained around the world.”

The prisoners include Narges Mohammadi from Iran. Samantha Powers tweeted, “Narges was arrested for her advocacy against oppression in Iran. Her twin children want her free to be home. Free Narges.”

The US State Department’s website reads in part, “Narges Mohammadi, a prominent human rights defender, had been arrested before for her work against the death penalty and oppression in Iran. But this time, she wasn’t released as she had been before. In May 2015, she was arrested, convicted, and sentenced to 16 years in jail. She is critically ill and requires ongoing specialized medical care, which she cannot receive in prison.Her young twin children have been awaiting their mother’s return… We call on the Government of Iran to release Narges Mohammadi immediately and reunite her with her family.”