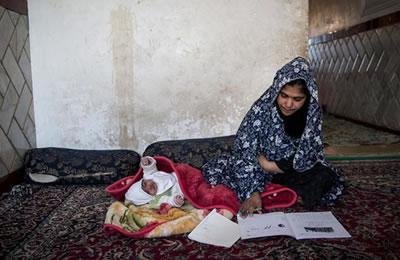 In an interview with the state-run Fars news agency, Zahra Sajjadi opposed reforming the Iranian regime’s marriage law which allows marriage of girls under 13 years of age with the consent of their fathers.

Zahra Sajjadi is the secretary of the Islamic Revolution’s Assembly of Educated Women, a state-backed agency promoting fundamentalist views on women and with opposition to any progress on women’s rights.

Sajjadi said, “The same prescription is not good for everyone. In tropical areas, some are ready to get married at 13 years of age and even lower.”

She criticized the efforts to lobby the clergy and attract their agreement on reforming the law, calling the efforts as “essentially wrong and useless.”

The remarks were made in reaction to the assertions of a parliamentary deputy last week who said they were attempting to receive the consent of some scholars to reform article 1041 of the Civil Code on the age of marriage so that legal authorities would decide on under-age marriages, instead of the father.

The theatrical measure will not have any concrete effect on the plight of Iranian girls and the common practice of forced marriages in the country and is attempted to curb the mounting domestic and international public opinion pressure on the regime. (The state-run Fars news agency – December 18, 2016)