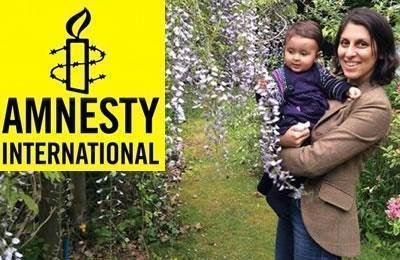 Iran: Imprisoned woman pressured to move her child to prison

“Iranian Revolutionary Guard officials have pressured British-Iranian charity worker Nazanin Zaghari Ratcliffe, a prisoner of conscience, to choose between moving her two-year-old daughter into prison with her for up to three days a week or sign a document to say that she does not want the ‘right to be with her young daughter’.”

There are no suitable facilities for children inside Evin Prison and neither choice is acceptable to Ms. Zaghari. AI wrote:

“What she had requested from the authorities instead is more regular visits – either a day-long visit or two half-day visits each week – with her daughter. She is currently allowed to have only one hour-long visit per week. The authorities seem to have imposed this choice in a misguided attempt to counter the negative publicity caused by the fact that she has been separated from her child. She has suffered a serious decline in her physical and mental health, and wrote a suicide letter to her husband in October.”

Nazanin Zaghari Ratcliffe was sentenced to five years’ imprisonment in September following an unfair trial before a Revolutionary Court in Tehran, which convicted her on trumped-up national security charges.