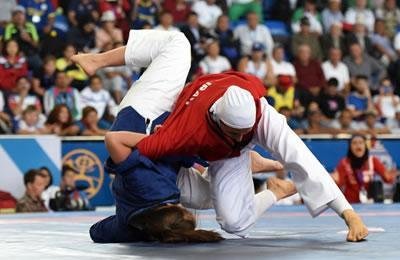 It is common knowledge that women are not allowed to enter stadiums in Iran. At the same time, women’s sports competitions are not broadcast by the national media and those women who personally undertake the expenses and participate in world championship tournaments are reprimanded and summoned.

Such a misogynous regime is now pretending to be concerned about “the expansion of women’s wrestling”.

The letter reads in part, “Many women are not interested in participating in a sport with such an outfit because of their different and special physical conditions compared to men, or they have certain cultural reservations… This factor can act as an impediment to the attraction of a considerable number of women of the world to wrestling. On the other hand… one of the common breaches in women’s wrestling is pulling the rival’s hair during the game.

“We propose that the United World Wrestling add a new method to women’s wrestling which is called cover-singlet wrestling. This would provide an opportunity for the interested women who because of the type of outfit, have not had a chance to participate in this field, to join the world’s wrestling community… This cover-singlet is a suitable outfit available to all which covers head to toe and protects the hair. It also has a cap which covers the woman’s hair and head. Rest assured that this type of outfit and protection will expedite expansion of women’s wrestling among interested women.” (The state-run Mehr news agency – December 23, 2016)