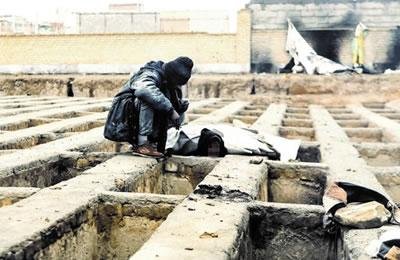 Rampant poverty has developed numerous faces in Iran. The large number of people who sleep in cardboard boxes is one of the main features of the Iranian capital. However, there have been reports indicating that the cold of winter has driven some of these people to sleeping in graves.

According to a report published in the state-run Tabnak website, some 50 people sleep inside empty graves of Nassirabad Cemetery in Shahriar (a small city west of Tehran).

These 50 people occupy 20 of the 300 graves dug in advance. Each grave hosts between one to four people. Notable among them is a woman by the name of Shahnaz who lives with her 18-year-old son and 16-year-old twins in one of these graves.

A number of families have also set up tents outside and around the cemetery. (The state-run Tabnak website – December 27, 2016)