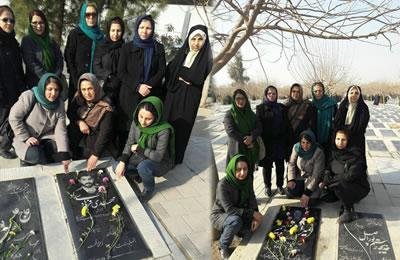 A group of Park-e Laleh Mothers and relatives of the martyrs of the 2009 uprising visited the tombs of their loved ones in Behesht-e Zahra and commemorated them on the anniversary of the climax of the uprising on December 26, 2009.

Ahmad Montazeri published an audio file of the meeting of his father with members of the Death Commission during the 1988 massacre. The measure caused much commotion in society provoking open discussions on this great crime against humanity. Ahmad Montazeri was sentenced to 21 years imprisonment for doing so. The Park-e Laleh Mothers condemned his unfair sentence and appreciated him for what he did.

Next, they visited Mr. Ahmadpour, one of the students of Mr. Montazeri, who has been stripped of his clerical clothes, was imprisoned for four years, and spent two years in banishment.