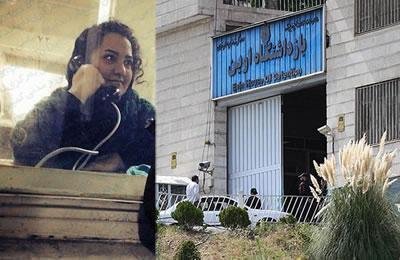 The civil and children’s rights activist Atena Daemi has written a defense against the new charges levelled against her by the Revolutionary Guards Corps.

Ms. Daemi, who is imprisoned in the women’s ward of Evin Prison, points out in her defense which was published on December 25, 2016, that she had been illegally traced via the mobile she had bought after being released from prison. She also asserts that the IRGC had planned to raid her residence in the absence of her parents.

Ms. Daemi has been accused of preventing the implementation of her verdict. She argues that the verdict, which she had not personally seen, was due to be implemented two days after the day she was arrested in a raid on her residence. “The verdict had been shown only to the security forces and its date was for another two days. Why did they raid our residence two days before the deadline?”

Another charge against Ms. Daemi is beating the security forces, which she calls “unfounded.” She states, “Had this been true, Atena would not be alive, today. We have been imprisoned for years despite being innocent. Now, imagine someone who is imprisoned in a room and wants to merely see her warrant or the agents’ ID. Is it ever possible for her to beat up two agents?”