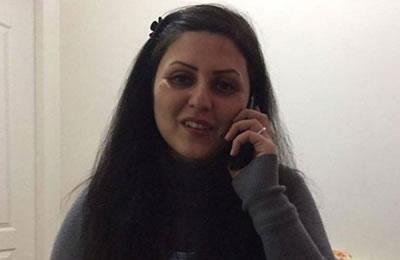 72 days of hunger strike by Arash Sadeghi and worldwide public opinion support for his cause forced the regime into retreat.

Ms. Iraee was released on a 500-million-touman bail (approx. $120,000). She had a brief meeting with her husband, Arash Sadeghi, when he said he will break his hunger strike now that he has achieved his demand.

Mr. Sadeghi did not break his hunger strike eventhough he was in very critical conditions and on the verge of death.

Arash Sadeghi’s condition attracted a lot of attention and support in Iran and worldwide, as well as in social networks.

The Campaign to #savearash made a world trend in the twitter.

A number of prisoners and the anti-death-penalty activist Sholeh Pakravan went on hunger strike in solidarity with Arash Sadeghi.

Amnesty International also issued an urgent action on January 2, 2017, demanding Mr. Sadeghi’s immediate release and urged the Iranian officials not to toy with the life of this political prisoner.

Ms. Golrokh Iraee had been arrested and imprisoned to serve six years for writing an unpublished book against the medieval punishment of stoning.

Iran: 19 couples get divorced every hour