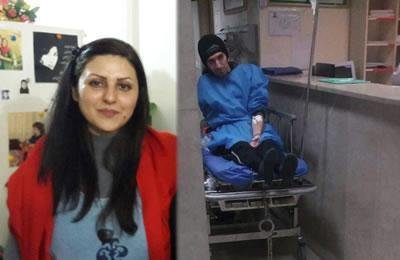 Officials of the Prosecutor’s Office once again rejected the inquiry for extension of prison leave for political prisoner Golrokh Iraee.

The request submitted by Amir Raessian, the defense attorney representing political prisoners Golrokh Iraee and her husband, Arash Sadeghi, was turned down on Tuesday, January 10, 2017.

Mr. Sadeghi’s leave was registered with documents, but his dispatch for treatment in hospital has been conditioned on Ms. Iraee’s return to prison.

Ms. Iraee’s mother has been warned about the bail she deposited for Golrokh’s leave.

On January 4, 2017, Ms. Iraee was allowed to leave prison after 72 days of hunger strike by her husband, Arash Sadeghi, in protest to her unfair sentence and imprisonment, and under pressure of domestic and international public opinion demanding the couple’s release.

Contrary to their promise, officials of the Prosecutor’s Office did not agree to extend Ms. Iraee’s leave. They have summoned Ms. Iraee back to prison to serve her sentence.