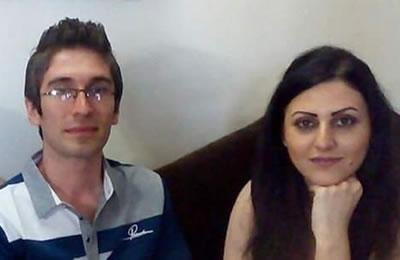 The Department of Implementation of Verdicts has sent a warning to Ms. Iraee’s mother who provided the bail for her daughter’s release from prison.

Prisoner of conscience, Golrokh Ebrahimi Iraee, was freed on a 500-million-touman bail on January 3, 2017, after 72 days of hunger strike by her husband, Arash Sadeghi, and after domestic and worldwide public opinion pressure on the regime. Officials of the Prosecutor’s Office, however, did not agree to extend her leave. According to Ms. Iraee, they have made her husband’s freedom and treatment contingent on her return to prison.

Arash Sadeghi has declared that he would resume his hunger strike if his wife is returned to prison.

Ms. Iraee has been sentenced to six years in prison for writing an unpublished story which was discovered in the search of her residence when security forces broke in to arrest her husband, Arash Sadeghi. She is accused of disseminating anti-government propaganda and insulting the sanctities. Her verdict was implemented on October 24, 2016, when she was arrested and taken to the Evin Prison.

Message of solidarity from Anna Zaborska, MEP from Slovakia