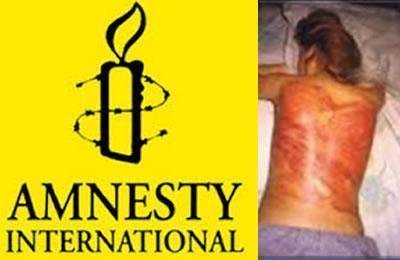 Amnesty International issued a report on January 18, 2017, criticizing “persistent use of cruel and inhuman punishments, including floggings, amputations and forced blinding over the past year” by the Iranian regime. The report includes examples of flogging and harassment of women, excerpts of which follow:

“Under Iranian law, more than 100 ‘offences’ are punishable by flogging… Many of those flogged in Iran are young people under the age of 35 who have been arrested for peaceful activities such as publicly eating during Ramadan, having relationships outside of marriage and attending mixed-gender parties. Such activities are protected under the rights to freedom of belief, religion, expression and association and must never be criminalized.”

AI noted a case last April, where a man and a woman were sentenced to 100 lashes each. AI added that a month later 35 young women and men were arrested in Qazvin Province and sentenced to 99 lashes each. The sentences were carried out immediately.

Amnesty International cites a Facebook post showing “a 28-year-old woman who received 80 lashes for attending a birthday party described the day she was flogged as ‘the worst day of [her] life’. She described how, after her arrest, her photograph and fingerprints were taken before she was led to a small room where a middle-aged woman flogged her repeatedly while her feet were in chains and her hands shackled.

“‘With the impact of the first lash, I jumped out of my [seat] uncontrollably. I was so shocked that even my tears would not drop. I wanted to scream, but I could not even control my voice. Every time she hit me hard, she would ask me to repent so that God would forgive me,’ she said.”
Amnesty International reported went on, “Another woman, who was also lashed for attending a mixed-gender party to celebrate her recent engagement in the city of Robat Karim, near Tehran, described how, less than one hour after the party began, security forces stormed the villa where it was taking place, confiscating bottles of alcohol. They questioned several of the guests and brutally beat many of them before taking them to a police station where they were insulted and interrogated. They were forced to spend three nights in jail before being sentenced to 74 lashes each.
“‘I don’t remember how many lashes I had received, but I reached a stage where I was just moaning and had become numb with pain.'”