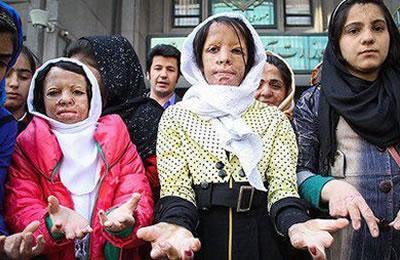 Young women from Shinabad sent a message to the victims of the disastrous fire which burned down Tehran’s famous 17-story Plasco Building on January 19, 2017.

The girls wrote in their message, “We burned in the fire of a kerosene heater in our class and have been suffering every moment for four years since. You burned in the explosion of the oldest building of Tehran and got stuck under the rubbles. We burned, did not say anything and grew up; you burned, did not say a thing and got buried under the rubbles. Our four-year nightmare has been that classroom and the nightmare of your families is the Plasco Building. We are the daughters of Shinabad. We are still mourning after four years for Saria and Sira (their classmates who died from serious burns)… We sympathize with you and shed tears for every moment of the pain of your getting stuck under the rubbles. We shed tears until the fire of Plasco is extinguished and your families may be relieved from grief.”

The girls’ school of Shinabad village, located in Piranshahr, in West Azerbaijan Province (northwestern Iran), caught on fire four years ago on December 5, 2012, due to the fire caused by a dis-functioning kerosene heater. At least 29 girls were badly burnt in the fire, two of whom died due to severity of injuries.