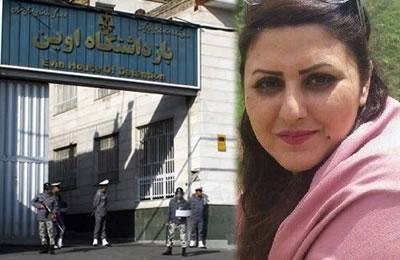 Student activist Golrokh Ebrahimi Iraee was arrested by the Revolutionary Guards Corps on Sunday, January 22, while leaving home. She was transferred to the Department of Implementation of the Verdicts at Evin Prison.

A source close to the Iraee family said, “Arash Sadeghi (Golrokh’s husband) had been taken to hospital before noon that day to do some tests. Ms. Iraee was heading to the hospital when she was arrested by forces of the IRGC Sarallah Corps.”

The source added, “Ms. Iraee has been transferred to the Department of Implementation of the Verdicts at Evin Prison. She called her mother and asked her to take her some of her belongings.”

Golrokh Iraee was released from the women’s ward of Evin Prison on January 3, 2017, after 72 days of hunger strike by her imprisoned husband, Arash Sadeghi. The Prosecutor’s Office, however, did not extend Ms. Iraee’s leave as it had promised and summoned her to prison.