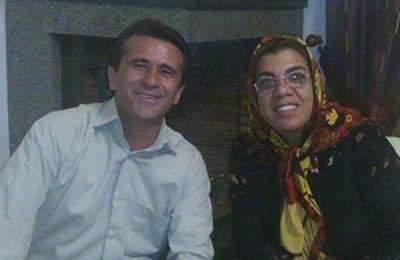 Parvin Mohammadi, member of the Managerial Board of the Workers’ Free Union, condemned the Prosecutor Office’s attempt to arrest Jaafar Azimzadeh, calling it “a measure against Iran’s working class”.

Tuesday noon, January 24, 2017, agents of Tehran’s Prosecutor raided the residence of Jaafar Azimzadeh, a leader of the Workers’ Free Union of Iran. Mr. Azimzadeh was not home at the time of the attack, but agents of the Prosecutor’s Office showed his wife a warrant for his arrest and intimated his oldest son.

Mr. Azimzadeh was released from prison on June 30, 2016, after 63 days of hunger strike under tremendous domestic and international pressure on the regime. He demands that national security charges be removed from the cases of civil and labor activists.

Ms. Mohammadi declared that she will not remain silent if Mr. Azimzadeh is arrested and imprisoned again. She reiterated, “The attempted arrest of Jaafar Azimzadeh is an effort to imprison voices that incessantly protest poverty, destitution and injustice. It is an assault on workers who have chosen him to represent them in following up on the thefts and plunder in the Social Security Organization. It is also the revenge of those who embezzle funds in the Social Security Organization from the protesters and genuine representatives of Iran’s workers.”