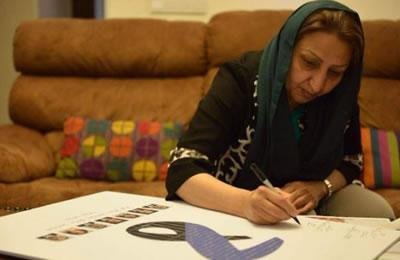 In brief telephone call with her family, Shahnaz Akmali informed them that she is detained in Ward 209 of Evin Prison. She also said that a 100-million-touman bail has been issued for her.

Ms. Akmali lost her son, Mostafa Karim Beigi in the uprising of 2009.

Ms. Sholeh Pakravan, human rights and anti-death penalty activist, published a post on January 27, 2017, in which she protested the arrest of Ms. Akmali. She wrote:

“Shahnaz is a very kind woman who tried to heal the pain of bereaved families… There are many families who can attest that she spent a large portion of her hardly-earned income on their food and other needs in the absence of their breadwinners, so that they would not go hungry… I urge everyone who cares about this land to try every possible means to help Shahnaz return home.”