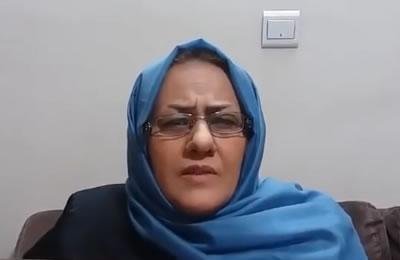 Massoumeh Nemati, mother of imprisoned civil rights activist Atena Daemi, in a video message declared support for Shahnaz Akmali who has been recently arrested and imprisoned in Evin.

Ms. Akmali lost her son, Mostafa Karimbeigi, in the 2009 uprising and has been active since then against the death penalty. She also helps families of execution victims and political prisoners.

Ms. Nemati said in her message, “Since 2014, when my family and I got involved with Atena’s arrest, we have had Shahnaz by our side. She was like a sister to me and supported my daughter, Atena. I know how difficult it is to be away from your daughter… So, I also declare that I stand by my dear Shahnaz and her beloved daughter.”