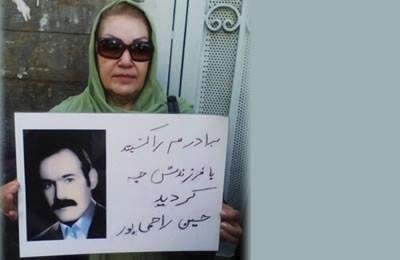 Iran: Woman to be jailed for pursuing her missing niece

Ms. Raheleh Rahemipour was sentenced to two years in jail on the charge of acting against national security.

Ms. Rahemipour pursues the fate of her niece, Golrou Rahemipour, who was born in prison in 1983. Golrou was separated from her mother when she was only 14 days old. In response to her parents’ inquiry, prison guards told them that Golrou was dead.

Ms. Rahemipour’s brother, Hossein, was executed in September 1984 by the Iranian regime. His family were not informed of his place of burial or manner of death. His body was never handed over to his family.

Ms. Rahemipour’s court hearings were held on November 2, 2016 and December 13, 2016. She had been previously summoned and threatened by the Intelligence Ministry for following up on the fates of her brother and niece.

The UN experts said in their statement, “We are concerned that the judicial process against Ms. Rahemipour may be a direct reprisal for her human rights activism in the search for her relatives, as well as the exercise of her rights to peaceful assembly and freedom of expression. We urge the Iranian Government to immediately drop all charges against Ms. Rahemipour and to halt any acts of retaliation against relatives, witnesses and human rights defenders who report cases of enforced disappearances.”