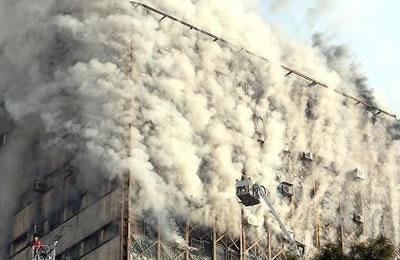 Thursday, January 19, 2017, the iconic 17-story Plasco building crashed down in a few seconds in the heart of Tehran after a blaze which could not be extinguished by the city’s primitive firefighting equipment.

The Plasco building housed a sprawling shopping mall and some 400 clothing and garment workshops and businesses with thousands of workers, including many women, working for them.

In addition to the firefighters, another 30 people, including two women, have been reported missing. Nothing has been said, however, on the number of women and men who have lost their jobs due to the disastrous crumbling of the high-rise commercial complex.

It is unquestionable that a large number of women and their families have become “devastated” right before the start of the Iranian New Year in March.

The Iranian regime has avoided giving any definitive figures on the number of people who lost their lives in this tragedy and attempted to cover up the actual number of casualties, and the extent of damages and consequences caused by the catastrophic collapse of the high-rise building.

Government agencies take advantage of such situation to evade paying insurance to the workers left unemployed by the destruction of the Plasco commercial complex.

The figures published by various state-run newspapers on the number of workers working at the Plasco building vary from 750 to 4000. Many of these workers were women, yet the government has so far refused to mention the female workers.

A government official, Fahimeh Firouzfar, head of the Staff to Empower Female Heads of Households, announced that the city’s Training Centers “are able to admit some 200” of “the Plasco building women who have lost their jobs”.

One wonders about the fate of these women while educated women with college degrees are working as peddlers in the capital’s metro stations. How, where, and when could these destitute women find a job which could respond to needs of the families they head?

Like other factories and workshops in Iran, only a small number of Plasco workers had unemployment insurance. The rest of them are not recognized by any government agency. Even to those who have insurances, the Social Security Organization pays a meager 812,000 toumans for three months while the poverty line in Tehran is 3.5 million toumans. Such trickle donations also stop after three months.

Due to the country’s economic bankruptcy, many of the workers working in the Plasco building had not received their last month’s salaries. Now, with employers losing their property, these working men and women have no more hope to receive their past-due wages. They are left with no form of support on the Iranian New Year’s Eve. They are extremely worried for their future.

One example out of hundreds is the case of the wife of Ghassem Shojaii, the sentry guard of the Plasco building who has been buried under the debris. His wife, his sister, and other relatives waited days in a nearby street to hear any news from Ghassem. Ghassem was father to an 8-year-old son and an 8-month-old daughter.

Ghassem and four other people got stuck in the building’s engine room. As the building was burning in fire, one of the five men called Ghassem’s family and told them that he and others were alive. His family informed the authorities of this call, yet they were told that the engine room was checked and no one was there. No one listened to them.

Ghassem earned a monthly salary of 850,000 toumans. Now, in his absence, it is uncertain how his family are going to survive.

The fact is that the collapse of the Plasco building was a human tragedy which has taken its toll on hundreds of Iranian women and children, whether those who have lost their husbands, or those who head their households and used to earn their living by working at the Plasco workshops. The news focuses on the shocking crashing down of the high-rise building without mentioning its main victims, namely hundreds of women who do not and would not enjoy any government support under the mullahs’ rule.