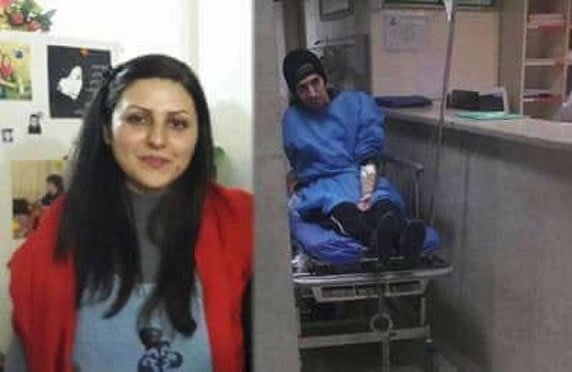 Golrokh Ebrahimi Iraee seeks justice to save her husband’s life

Political prisoner Golrokh Ebrahimi Iraee who is imprisoned for writing an unpublished story against the inhuman punishment of stoning, sent an open letter from Evin Prison where she is detained. In this letter, Golrokh Ebrahimi Iraee enumerates the instances of breaches of law and breaking of promises by the Prosecutor and Judicial authorities of the clerical regime.

Golrokh Ebrahimi Iraee has urged everyone’s support to save the life of her husband, political prisoner Arash Sadeghi, by granting him prison leave so that he could be treated in hospital.

Ms. Iraee was temporarily released on January 3, 2017, following 72 days of hunger strike by her husband, Arash Sadeghi and in the wake of extensive public opinion support in Iran and abroad. According to the promises made by the Prosecutor’s assistant, Ms. Iraee’s leave had to be extended until the re-examination of her case is complete. Mr. Sadeghi, too, who suffers from intestinal adhesion and his kidneys have become largely dysfunctional as a result of a lengthy hunger strike, had to undergo urgent treatment.

However, contrary to the promises made, Golrokh Ebrahimi Iraee was returned to prison after only four days and Mr. Sadeghi has not been treated, yet. The text of Ms. Iraee’s letter appears below:

Almost a month after my husband broke his hunger strike after 72 days, he is still prevented from being sent to the hospital or even on medical leave although the prison’s coroner and two tests carried out over several hours in hospital verify the need for his urgent hospitalization and treatment under the supervision of specialist doctors.

Arash stopped his hunger strike but the Prosecutor and other officials broke their promises.

The Prosecutor had admitted that there was a breach of law in presenting the evidence to file a case against me, which indicated that I had insulted the sanctities.

According to the law, the implementation of my sentence has to be halted and I can be free until my trial is resumed. I was ultimately given assurances by the Prosecutor that my prison leave would be extended until the completion of court proceedings and re-examination of my case.

Only four days after got out of prison, Mr. Haj Moradi, the Prosecutor’s representative and assistant who oversees prison affairs, informed me that despite the promises made, the Prosecutor has disagreed with the extension of my leave.

Based on the talks I had earlier with the ex-assistant prosecutor and supervisor of prison, Mr. Hajiloo, I did not return to prison after the Prosecutor broke his promise. In addition to the Prosecutor, he (Hajiloo) had also given me assurances in the presence of the Warden of Evin, that instead of halting the implementation of my verdict, I can have a prison leave which would be extended allowing me to be free until the re-examination of my case is completed.

They broke their promises in my case and also failed to send Arash to hospital.

Based on the officials’ agreement with my husband’s medical leave, I did all the paperwork needed for his leave so that he could pursue his treatment process outside prison. Again, I was stunned to find out that all the doors are closed while I had completed all the stages of depositing the bail and preparing the documents. Earlier, the daily newspapers, Sharq and Iran, had specifically reported that Arash Sadeghi is going to have a leave. To this day, Arash has remained in prison without receiving any special medical care or treatment and his condition is deteriorating with every passing day.

My husband has lost his health forever due to the officials’ reneging on their promises. Now, I am afraid that he would lose his life because of their broken promises and indifference.

On the morning of Sunday, January 22, 2017, a team came to our residence to arrest me because I had not reported in to prison. A team from the Prosecutor’s Office and a team from the IRGC Sarallah Garrison. The IRGC team was accompanied by the same person who broke into our house on October 24, 2016. He had now come to re-arrest me although I had filed complaint against his offensive and humiliating manners. Not only, my protest went unheeded but I saw the same person from the above-said agency coming to my house again in the company of other people without any arrest warrant.

This time around, they arrested not only me, but also my friend, again without presenting any arrest warrant or verdict. They took him away in a car that belonged to the IRGC team.

I did not know where they were taking my guest. I just knew that not only they did not have any arrest warrant for my friend but also they were not aware of his presence in my house.

The foul-mouthed agent who did not hesitate to insult me in every possible way, attacked the residence of Atena Daemi a few days later to arrest her. He insulted her in the same manner. Now, he was in our house again.

It is common knowledge that the task of arresting people to implement their verdicts has nothing to do with any special agency. It must be carried out by a team from the Office of the Implementation of Verdicts. Unfortunately, in the cases of me and my friend, I have seen that the IRGC Sarallah Garrison files the complaints as a private complainant. Then, a team comprised of members of this garrison, make the arrest and in the next stages, they carry out the interrogations and make decisions on the charges.

What took place during my primary trial presided by Judge Abolghassem Salavati, clearly attests to the fact that the above-said agency (i.e. the IRGC Sarallah Garrison) exerts influence on the issuing of verdicts and subsequently on its implementation when it gets fully involved.

The conditions of every individual during detention are also completely supervised by their interrogators who impose their opinions on all cases. Regardless of how you follow up this matter, the ultimate conclusion is that the Judiciary and the Prosecutor’s Office are not independent.

By filing complaints against the families of prisoners and execution victims, there is an increasing concern that the atmosphere of repression is being escalated. People are imposing their personal and subjective views and the lawsuits filed against any person could also affect their families.

Arash has already lost his mother because plainclothes agents broke into their house. Over the past years, we have seen that relatives and families have been arrested, summoned, or sentenced to jail, cash fine and even flogging until just very recently. They do not enjoy any security or privacy, and there is no responsible official who would account for this.
Shahnaz Akmali, whose son Mostafa Karimbeigi was shot dead during the uprising on December 27, 2009, is one of the mothers who is deprived even of holding ceremonies to commemorate her son, facing constant pressure by security forces. Her demand for identification of the perpetrators of her son’s murder has not been realized, yet.

Pressuring and harassing the families is to the extent that even the tombs of the victims are repeatedly desecrated and their tombstones broken by shooting or otherwise. And again, no official is accountable for this sacrilege and the scars it inflicts on the hearts and souls of the families.

Now, our privacy has become even more insecure and the atmosphere of repression has become ever tighter to the extent that even our guests are arrested and interrogated.

Such lawlessness, lack of transparency, the (unlimited) realm of power of the agencies and institutions, lack of independence of the Judiciary, and their lack of will and power in delivering on their commitments and obligations, indicate that there is a power whose influence is above that of all the branches and leaves them no independence or executive power. This means that the restrictions on activists and their families are going to get harsher every day.

For example, the Prosecutor agreed with my husband’s demand but reneged on his promise after a few days without any explanation. He also accepted to send Arash on leave; the representative of the prosecutor signed the documents, all the stages of this procedure were completed, and the bail was deposited, but he was not sent on (medical) leave despite his critical conditions.

I must point out that my husband was sent to Taleghani Hospital on January 7, 2017. After undergoing endoscopy and other necessary examinations, the doctors’ instruction was to hospitalize him. After a few hours at 12 midnight, my husband was discharged from hospital to our surprise, and returned to prison by a number of plainclothes agents. This is while Arash’s condition was very critical and doctors had refused to discharge him. Finally, they had been intimidated and a young intern was forced to sign the discharge papers of my husband.

In light of the above explanations and what was said earlier, I am concerned about Arash’s physical condition. In addition to the doctors of Taleghani Hospital and the tests carried out in the Shohada Hospital of Tajrish (north Tehran), Evin’s coroner has also confirmed that my husband’s condition is grave and he needs to be hospitalized for treatment.

My husband, however, is detained in prison without any treatment or extra care, a situation that inflicts more irreparable damages on him with every passing day.

I expect that the medical community react to the gradual and unfair killing of my innocent husband. The Judiciary which is expected to be independent, and also the Revolutionary Guards Corps are responsible, if anything happens to my husband.

A week after my latest arrest, despite having official permit to have weekly meetings and weekly ward-to-ward telephone calls with Arash, I have no news from him. My permits were signed by Mr. Hajiloo, ex-assistant prosecutor and supervisor of prison.

I cannot comprehend who has a greater power than the Prosecutor’s representative who overrules our conditions, depriving us of our rights and building another prison for us inside the prison.

We get filled with rage,

Will destroy the pillars of oppression.

You will be confronted by the masses,

The nation that stands up to you.

You will find no way to run away.