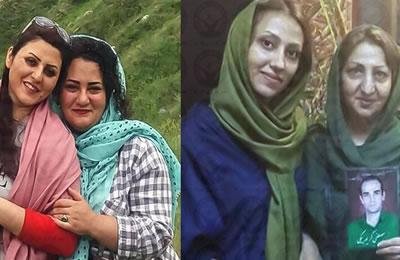 Golrokh Ebrahimi Iraee and Atena Daemi, both imprisoned in Evin Prison, wrote a letter to Maryam Karimbeigi and called for freedom of her mother, Ms. Shahnaz Akmali.

They saluted Maryam for her patience and hailed her mother for her strength and resistance. They added, “We see ourselves as Shahnaz’s children and we demand her unconditional release from prison. We hope that such offensive behavior on the part of the security forces would come to an end, and such repressive atmosphere would calm down a bit.

“You should know that we stand by you and your honorable family forever.”

On the morning of January 25, 2016, Shahnaz Akmali was arrested by plainclothes agents and transferred to an unknown location. Ms. Akmali lost her son, Mostafa Karimbeigi, during the 2009 uprising when he was shot dead by security forces.