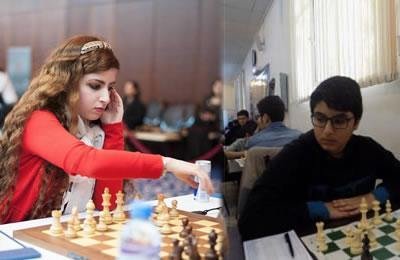 Iran: Young woman expelled from national team for not wearing the veil

Dorsa Derakhshani, member of the Iranian Women’s National Chess Team and the sixth world champion in under-18 games, got expelled from the national team for not covering her hair in the Tradewise Gibraltar Chess Festival.

Head of Iran’s Chess Federation, Mehrdad Pahlevanzadeh, said they will “seriously deal” with a sister and brother who played in the chess festival in Gibraltar because the girl did not observe the veil and the boy played with an Israeli player.

Pahlevanzadeh pointed out, “The first step in dealing with them would be to deprive them from every game that is played in Iran and in the name of Iran, and they will not have the chance to be on the national team.”

Dorsa Derakhshani, 18, is presently studying in Spain and had participated in the Gibraltar games independently. Her brother, Borna, 15, had also registered in the games on his own. He played with Alexander Huzman, grandmaster from Israel. (The state-run Fars news agency – February 18, 2017)