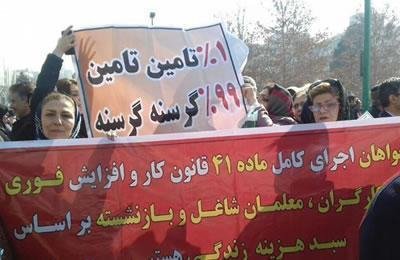 A number of workers and labor activists staged a protest in Tehran on Tuesday, February 21, 2017, in protest to the Iranian regime’s policies against workers.

Female labor activists actively participated in the protest and carried large banners indicating workers’ demands. One of their placards read, “We demand full implementation of Article 41 of the Labor Act, and the immediate increase of the salaries of workers, working teachers and retired teachers according to the Minimum Expenditure Basket (MEB).

Ms. Parvin Mohammadi, member of the Board of Directors of the Workers’ Free Union, was also among the protesters.

Iran: Teachers, including many women, demand their salaries