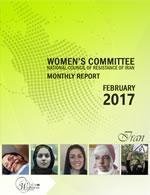 The Iranian regime resumed ruling for harsh and cruel punishments for women in the month of February.

Women were beaten up in public and arrested for improper veiling or attempting to enter sports stadiums. More women were arbitrarily arrested for defending human rights or proselytizing their beliefs.

Amnesty International in its annual report issued on February 22, 2017, pointed to the rampant arbitrary arrests of women in Iran and wrote, “The authorities renewed their crackdown on women human rights defenders and increasingly likened any collective initiative relating to feminism and women’s rights to criminal activity.”

Nevertheless, women played an active and prominent role in the social protests. They were at the frontline of all protests by teachers, workers, government employees and other social strata.

Women had a significant presence in the extensive demonstrations in Ahwaz in protest to continuous water and power outages and dire environmental conditions that lasted almost a week.

The Iranian Resistance’s President-elect Maryam Rajavi sent a message to the people of Ahwaz and Khuzistan, especially the women and youths, and urged them to unite their ranks and escalate their protest demonstrations for their just demands.

Two women received death sentences in the month of February.

On February 16, 2017, the Iranian regime’s Supreme Court turned down the appeal for re-examination of the case of Zeinab Sekaanvand who is sentenced to death. She was 17 at the time of alleged crime. Ms. Sekaanvand has denied the charges against her.

A young woman, 27, from the southeastern Sistan-o Baluchistan Province has been sentenced to death in Mashhad. The unidentified woman, mother of six, is charged with drug-trafficking.

Several cruel punishments were handed out in February.

The Criminal Court of Lorestan Province sentenced a man and a woman to stoning on February 3, 2017. The woman was identified as S.M. The verdict was issued for the public dissemination of a video clip showing the illicit relationship between a clergy and a woman in Gerab, Koohdasht. (The state-run Kashkan website, February 3, 2017)

A woman was sentenced to the blinding of one eye, and seven years imprisonment in Dehdasht, capital of the western Iranian province of Kohgiluyeh. (The state-run Tasnim news agency – February 3, 2017)

Another young woman in Tehran was sentenced to 99 lashes and internal exile merely for calling and texting a man. (The state-run T.news website, February 4, 2017)

A 32-year-old woman by the name of Nahid was sentenced to 15 years in prison and 99 lashes of the whip for illicit relations with a man who drugged, raped, filmed and blackmailed her. (The state-run Rokna.ir, February 18, 2017)

An elderly woman, Saharnaz Moussavi, was beaten up by Isfahan’s Dastgerd Prison guards on February 11, 2017, and subsequently abandoned in the street when she inquired about her imprisoned son, Qanbar Ali Safari.

Human rights advocate and anti-death penalty activist Shahnaz Akmali was deprived of access to legal counsel and visitation by her family while in detention. Ms. Akmali was temporarily freed from jail on February 18, 2017, on a 100-million-touman bail ($30,800) until her trial convenes.

She had been arrested at home on January 25, 2017, by six security forces who took her to the Evin Prison. Agents of the Ministry of Intelligence (MOIS) later called her daughter, Maryam Karimbeigi and threatened to burn their house. Ms. Akmali lost her son, Mostafa Karimbeigi, during the 2009 uprising.

Prison authorities prevented hospitalization of Nazanin Zaghari Ratcliffe despite deterioration of her illness. The British-Iranian prisoner held at Evin Prison needs to be dispatched to hospital to be treated by neurologists.

Tahereh Riyahi, journalist, is in critical physical conditions in prison. Ms. Riyahi suffered seizures under interrogation. She is denied visits but in a telephone contact with her family she told them not to wait for her any longer.

Massoumeh Zia, held in solitary confinement at Evin Prison’s Ward 209, is deprived of family visits. An informed source said Ms. Zia has not been permitted to have a lawyer. There is no information available on the details of her case.

Political prisoner Soheila Minaii, 27, was transferred to solitary confinement of Kerman Prison on February 22, 2017. She was due to stay in solitary for one week for insulting Khamenei, the mullahs’ supreme leader, and other government officials.

Raheleh Rahemipour was sentenced to two years in jail on the charge of acting against national security, for pursuing the fate of her niece, Golrou Rahemipour, who was born in prison in 1983. Golrou was separated from her mother when she was only 14 days old. In response to her parents’ inquiry, prison guards told them that Golrou was dead.

Massoumeh Sadeghi was arrested in a raid on her class by security forces in Isfahan on February 12, 2017.

Security forces raided the residence of civil activist, Nora Najafi, on Tuesday, February 14, 2017. They intimidated the residents and threatened to break into the house.

Civil rights and women’s rights activist Farzaneh Jalali was arrested February 23, 2017, in Kermanshah (western Iran). She had been summoned by phone to the Department of Documents Registration but was arrested when she reported in.

Mehrnaz Haghighi, physician and civil rights activist, was arrested in the southern Iranian port city of Bandar Abbas on February 19, 2017, and taken to an unknown location.

Violations of basic freedoms and rights

Dorsa Derakhshani, member of the Iranian Women’s National Chess Team and the sixth world champion in under-18 games, was deprived of participating in national tournaments for not covering her hair in the Tradewise Gibraltar Chess Festival. The director of Iran’s Chess Federation, Mehrdad Pahlevanzadeh, said she deserves to be “seriously dealt with” for not observing the veil in Egypt. (The state-run Fars news agency, February 18, 2017)

Sholeh Ram and her husband, Shayan Rahimi, were arrested on February 1, 2017, in Zahedan by intelligence and security forces and transferred to an unknown location.

A government official announced that only 18 per cent of women heads of household have jobs and employment. He said the number of female-headed households will reach 3.5 million by the end of this (Persian) year in March 2017. (Ebrahim Ghaffari, the state-run Tasnim news agency – February 12, 2017)

Girl children of Qeshm study in tents because the classrooms are very old and badly worn out and the government has not attended to their schools. (The state-run IRNA news agency – February 1, 2017)

Women top the list of those deprived of education in the southwestern province of Khuzistan in Iran. (Gholamreza Shariati, the state-run Mehr news agency – February 6, 2017)

Infant mortality rate in Iran is five times the developed countries’, said Ali Akbar Sayyari, deputy Minister of Health. He said, “Every year, 15,000 infants lost their lives in Iran. That is, for every 1000 births, there are ten Iranian infants who die.” He also stressed, “Every year, some 300 mothers die in Iran.”

The latest official statistics show that one woman is addicted in Iran for every 9 male addicts. (Hamidreza Fat’hi, the state-run IRNA news agency, February 5, 2017)

In the evening of Saturday, February 11, 2017, a young woman from Mahabad hanged herself and died. Pariya Mohammad Shiekheh, 22, was a student of accounting at the Free University of Mahabad.

Shadi Khaliani, 14, committed suicide on February 15, 2017, by drinking acid due to restrictions she faced in the family. The horrifying incident happened in the city of Naghadeh in West Azerbaijan Province.

A young woman was stabbed to death by her father on February 2, 2017, in Qa’emshahr, northern Iran, for taking part in a night party. (The state-run Rokna.ir, February 6, 2017)

Political prisoner Maryam Akbari Monfared wrote to the United Nations Working Group on Enforced Disappearances and urged them to probe the case of her siblings massacred by the Iranian regime in 1988.

In her letter on February 17, 2017, Ms. Akbari asked the UN experts to hold the regime accountable for the execution of her brother, Abdolreza, and her sister, Roqieh Akbari Monfared, in summer 1988.

The people of Ahwaz, with prominent presence of women, began several days of demonstrations on February 12, 2017, in protest to frequent water and power outages and severe air pollution in the capital of Khuzistan Province. The protesters chanted, “Death to tyranny”, “clean air is our right, Ahwaz is our city”, among other slogans.

A number of women defending human rights and the families of death-row prisoners gathered on February 25, 2017, outside the parliament in Tehran and demanded abolition of the death penalty. The protesters were from Tehran, Charmahal-o Bakhtiari, West Azerbaijan, Isfahan and Qeshm.

A number of retired teachers including a remarkable number of women staged a protest in front of the Budget and Planning Organization on February 14, 2017 in Tehran and demanded their 30-year bonuses.

Teachers who have contracts with the Department of Education in Hamedan (western Iran), held a gathering on February 23, 2017, in front of the Governor’s Office to protest the department’s failure to pay their salaries for six months. Many of the protesters were women. Women teachers also staged a gathering on February 22, 2017, with the same demand outside the office of the parliamentary deputy from Hamedan.

A number of workers and labor activists staged a protest in Tehran on Tuesday, February 21, 2017, in protest to the Iranian regime’s policies against workers. Female labor activists actively participated in the protest and carried large banners indicating workers’ demands.

Hundreds of retired teachers and staff of the Education Ministry, including a large number of women, staged protest demonstrations on February 21 and 27, 2017, across from the Iranian parliament and demand balancing of their salaries with others.

Hundreds of people including a large number of women staged a protest demonstration on February 19, 2017, outside the Iranian parliament (Majlis). The protesters had placed deposits with the Caspian Credit, a company operating with a license from the Iranian Central Bank that plundered their deposits. The protesters demanded the government and the Central Back to refund their money.

Another protest with active participation of women was held on the same day in front of the parliament in Tehran. People who have applied for housing from the Mehr Housing Foundation, demanded granting of their requests. They held placards protesting the government for their homelessness and undecided state.