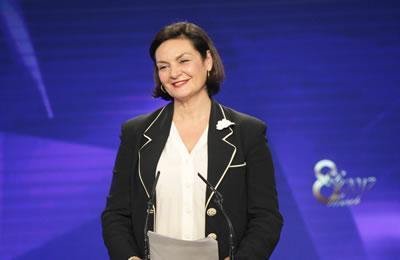 Once upon a time, there was a kingdom where a group of evil men imposed their ruthless rule on its people, where singing and dancing was forbidden, where girls could not choose their clothes and were forced to dress in dark colors and hide their hair.

These men had cruel beliefs and tortured and killed those who did not (submit) to them. They loved war and they hated freedom.

But in this unhappy country, there were also brave women and men who rose against this tyrants and fought with unfailing courage to get rid of these unbearable (inaudible).

In this long struggle, some of these freedoms lovers were able to escape from their oppressors and convinced people from many places outside their country to support them. And so they worked together in their effort to defeat these evil men.

This was the tale I told my daughter Gloria when she was 4. And when for the first time, my husband (Alejo Vidal Quadras) and I, went to Auvers-sur-Oise to an event organized by the PMOI in solidarity with the residents of Ashraf, this was the way I used to make my child understand what her father and I were doing there.

Of course, when she met Mrs. Rajavi, she immediately realized that she was talking to the fairy Queen that was leading the battle of light against darkness.

Today, Gloria is 12 and she is here because she wants to express her admiration and deep affection for you on the Women’s Day. And she is also here because, as good parents Alejo and I try to be, we want to give her the best education. Education is most efficiently acquired by the way of examples and we cannot imagine a better model for her as a woman to be than the dedication, determination, generosity, endurance and heroism of the women of the Iranian resistance.

Why is it that the women are the driving force and the heart of the movement against the totalitarian theocracy of the mullahs of Iran? The reason is obvious because (inaudible) of the society they have closed, intimidated, morally deprived, (inaudible) of hope is the opposite of what we represent in our modern world, (inaudible) efficiency, joy, intelligence, compassion, power of will and thrill for the future.

Gloria is aware now that the tale I told her eight years ago is the painful everyday life for the Iranian people.

And she figured to grow up and also contribute to your undertaking. When she was a baby she expected a happy end for this story, the happy ending that I could not give to her then.

Today, in this afternoon of Women’s Day and the celebration of Women’s Day with all of you, I can picture for her what the end will be, thanks to the long and unbearable sacrifice of the women of the Iranian resistance.

An Iran where women will choose freely their attire, religion and career, where they will see their dignity respected, where they will be judges, presidents of the republic, or housewives according to their rights, where they finally will be granted all their rights as citizens and human beings, and the best of it all, is that this will no longer be a fantasy but a bright and tangible reality.