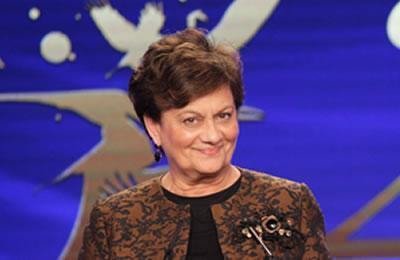 Attorney, President of the Association of Female Jurists from Italy

This is the first time I am participating in this ceremony. Therefore, I would like to introduce myself: I am the President of the Association of Jurists in the city of Palermo, capital of Sicily Province in Italy. I have brought the greetings of my own branch of association and the International Federation of Female Jurists, of which we are a branch. As stated in its constitution, this federation aims to spread women’s awareness of their rights and protect their rights.

As I said, it is the first time I am participating in this conference but I have been following up on your struggle with interest and love because I believe this struggle is the struggle of all women of the world.

I would also like to express pleasure over your collective relocation from Camp Liberty to Albania, which I strongly supported, and which concluded in victory. I hope that you can live a free life and you can struggle effectively for democracy in your country. Many of the Iranian regime’s laws not only ignore women’s rights, but many of them hurt women’s dignity.

Obviously, the Iranian regime believes it is necessary to keep women inferior for the survival of the society and the government. Such inferiority has been institutionalized in the Iranian regime’s laws and is implemented through continuous violent monitoring.

In such circumstances, many Iranian women show resistance and pay a high price for it. They are incarcerated in prisons and unfairly prosecuted. This is a clear example that these women have a profoundly democratic view of social and political life. These women are witnesses and carriers of this outlook not only for the Iranian society but also for the world as a clear example of co-existence.

The situation of human rights is not suitable in Iran and there are flagrant discriminations against women. However, even in many of our western societies, there are tendencies to marginalize women and there are patriarchal defiance attempting to obstruct realization of equal opportunities.

For long years and even now, one must refer to the Judiciary officials to have equal rights and gender-balance observed in the government and government offices. This tendency is very dangerous because it is concealed under a suspicious eliminating behavior. Politicians’ official remarks are not implemented in practice. There is a kind of commercial abuse of women in the social media which does not respect them. In our schools, and generally in the society, are children are not taught to respect women. Italy has dropped to rank 50 in the Global Center Gap Report 2016 and we are witnessing the consequences of this wrong policy every day and in various forms of injustice, violence against women, and even their deaths. Eighteen women were murdered in Italy in the year 2016. Therefore, we must know that any form of legal regression in the case of women is always on the way and everywhere.

This is why we must share in and participate in the Iranian women’s struggle to achieve their rights.

So, we have to teach our sons and daughters that they must resist, and resist, and resist. When a woman rises up to gain her rights, even if she is not aware of it, she has risen up for the rights of all women. I thank Mme. President Maryam Rajavi for including equality of women and men in her government’s platform. I hope that this platform can be implemented in Iran, as soon as possible.