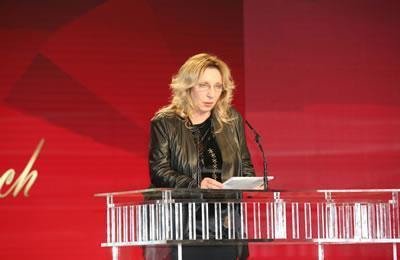 Diana Culi Writer and journalist, politician and former representative of Albania at the

Parliamentary Assembly of the Council of Europe

We thank you all for having gathered us here today to celebrate and commemorate. Many of us have created a group which we know and meet each other. It has happened many times that an Albanian friend has asked me why I was this attached to the cause of Iranian women, to those who live in exile, but even to those who live within the Iranian state borders. My answer was: For many reasons.

As a person who has a long history of activism in women’s rights, the flagrant violation of women’s basic rights in Iran, discrimination, extreme inequality and the absence of social security from which Iranian women suffer, attracted my attention. 73 women have been executed in Iran only during 2013 -2017, for ideological reasons, meaning because of extreme male chauvinism, conservatism and fanaticism. The two last women were executed last January.

As we heard, women in Iran are not only allowed to sing at concerts, but they are beaten up when they try to celebrate the 8th of March. The laws approved recently, force young girls, under 15 or even under 10 years old, to marry. They can’t control their own lives, but they are conscious of the situation.

They are women of a great nation, with an ancient civilization and history, but they suffer from religious fanaticism, oppression. And no religious, ideological or political, or even patriotic reason exists that can justify the oppression of women in any country of the world.

Us, me, Albanian women, Iranian women, women of the entire world, all of us that are in the forefront of the fight for women’s rights, for as long as we live, we will always fight so that not even one single woman be oppressed and abused. We will always pass this holy mission for women on to other generations. Iranian women never stop fighting and we are witnesses to this.

They live amongst us and in many other countries of the world. They help to protect women living in Iran and support the Iranian resistance.

We, as Albanians, are proud that we were able to help an important group of residents, former residents of Camp Liberty that are here now, free.

This is a historic victory. These brave and courageous women that are supported by brave and courageous men are led by Mrs. Maryam Rajavi, who has been leading the “war” for human rights and gender equality for many years. She has been doing this because she hopes that one day she will see Iran a free place.

Albanians will always be friends of yours and will support you in your relentless and noble efforts, in your holy mission for freedom and equality of humans. You are an example for us and all of the women of the world, for all the progressive, democratic and freedom-loving people. Your platform to support the political leadership of women, which is one of the many platforms that you have for equality, is the one that one day will change all the countries of the world, the whole world.

Dear friends, you are not alone, you will always have us by your side in your battle.