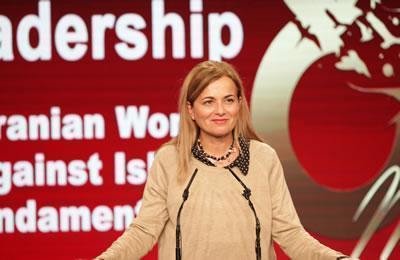 Former member of Senate from Spain

First of all, I would like to greet all these brave women of Ashraf.

March 2013 was the first time I met Mme. Rajavi and the PMOI people. I remember that it was in Paris on the occasion of women’s day, like today. One month before Camp Liberty had been attacked by Iraqi forces. It wasn’t the first time and unfortunately neither was it the last time. But when I came to Paris, I barely knew anything about the Iranian opposition and knew much less about the movement of Iranian Resistance and their brave leader Mme. Rajavi.

Regarding Mme. Rajavi, I must admit that I felt really surprised about her leadership: a woman in an Islamic country. But I understood very soon that this female leadership was one of the most important differences between this and another kind of opposition movement in the Middle East. In any case the person, I met in Paris in March 2013 was a strong woman, a leader able to maintain the hope, the aims and the courage of her people on this long painful and hard road to freedom.

Anyway there in Paris my relationship and my engagement with Mme. Rajavi and with the democratic Iranian opposition started. Since that day, I have worked for their safety and always support through the difficult days. I have worried about them in the attacks and I have mobilized my efforts as soon as I heard about their situation and difficulties and I have joined this movement with my other colleagues.

This engagement has firmly continued for these four years throughout my time in the Spanish Senate and now as a human rights activist and, especially, as a friend.

I especially remember, the massacre in Camp Ashraf in which fifty-two defenseless people were killed in a brutal attack in which Iraqi forces abducted seven members of the camp, six women and a man. We denounced this atrocity in Geneva and we felt the deep pain of the relatives of the dead. How can we forget Mme. Bolourchi and the women on hunger strike. In that moment, we are all the seven hostages and it was not only a hashtag in Twitter.

We reported this fact to the European Union High Representative Frederica Mogherini but it was useless. The agreement with the Iranian regime has been made.

Meanwhile, the war in Iraq had started and since that moment the situation of the refugees in Camp Liberty was much more untenable in the cross-fire between Daesh and the Iraqi government. In this moment, we asked again for the refugees to leave the camp and be given asylum in democratic countries. Now, despite the suffering and despite the difficulties, their departure from Iraq became a reality. Thanks to all these people who made it possible. All my gratitude to Albanian people. As for me, believe me, I will continue to stand by you until Iran is free. Thank you