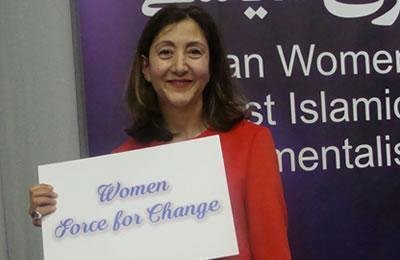 You know after all these years of struggle and of suffering, in my heart of woman, I have learned that I can forgive the bad that has been done to me. I can sometimes forget it. But I cannot forget the wrong that is done to the people I love. So that is why when I landed here, in Tirana, I came with my heart filled with gratitude and respect. Because I will never forget the blessing that this country has given to us. And I want to thank Elona (Gjebrea) and Drita (Ayduli) which are the two women that I know about them in Albania that are not only women leaders but also representative of their country, to tell them how much you have changed our lives. To all of us, you have saved 3,000 of people that I love. Thank you.

And when I arrived, as I was yesterday talking to some of you, you told me that we knew each other before we had met. And that is so true. We have been together for seven long years. Years in which joy was not in the agenda. You see when I see today Maryam’s face blooming, happy, victorious, I know the contrast. We had Maryam during seven years that was in pain, in anxiety, in fear of what could happen to each one of you. And yesterday, as I met her daughter — which by the way looks so much like her, I didn’t even need someone to tell me that it was her daughter because it’s her face– I thought, this is Maryam when she was twenty. And then I was reminded of what Maryam always said to me during all these years. You know, we became very close. She knows my children. We love each other. I was always asking her about her children. And she would always tell me with pain: my daughter is fine but you see, I don’t have only one daughter. I have one thousand daughters and two thousand sons.

So you cannot imagine what it was to be in this side of the world as you were under attack and abuse in the other side. First in Ashraf and then in Camp Liberty.

When I was talking to you yesterday, it was the first time I wanted to know and I asked you, we were sitting at a table and we draw on a napkin the plan of Camp Ashraf because I wanted to understand how did it happen when the soldiers came and invaded the camp with their tanks and began shooting on each one of you. How did it happen? Where were you? What were you thinking? What were you feeling?

And then, you had these amazing answers. One of you told me, well, we were very preoccupied that you were seeing these images. You were worried about us. Well imagine you were thinking about us being worried and we were really worried. But the other thing that made me laugh was when I said OK but how did you react? And you told me that you came out to just confront the tanks so that they couldn’t move further because you knew that they wanted to invade the camp and slaughter each one of you. So you did a human brush. Women did a shield with their bodies. And I said come on! How can you, fifty women, stop the tank? And then you laughed and you said: Easy! We were all together and we pushed the tank.

And all those stories that you have told me that I cannot summarize today, all the things that you didn’t tell me that are in your heart, those are the things that have to be written because they are the legends that will be told in future generations in Iran of this resistance that will bring freedom, equality and justice to your country.

And I have to tell you that when I say that you are the heroes I mean you all, men and women, but also Maryam. Because I could not witness your suffering and your pain in those dire days when you were under attack, when you were wounded, when you were sometimes saved by a miracle, but I can give testimony of Maryam’s courage.

When I first met her I have to tell you that as I had been invited to a conference with all of you and for you – you were at the time still in Ashraf– my computer went viral. I was bombarded by information against the MEK. How do they do that? I don’t know. The fact is that whenever I would open my computer and I would go into the browser, I would have like a burst of information about the MEK and how the MEK was a terrorist group. So you see, I was in hands of terrorists for nearly seven years. So, when I read those things that were shoveled to me through the web, I said well, no one is going to tell me what to think. I want to go and see them and meet them and I would take a decision upon my instinct and what I have learned in life.
So, I have to tell you that when I met Maryam we fell in each other’s arms. And I knew that they could say many things about Maryam but not that she was a terrorist and not that she was a killer and from that day, you are my family, you are my sisters and my brothers. And I know how hard it is to be united. I know how hard it is to for example build a place like this one in four months when before there was nothing.

I mean this is you! And if you can do this here, like magic, imagine what you will do when you get to Tehran.

So you see my father, when I was a child, he had this hero. It was a Latin American hero, a young soldier that actually became a general as a reward for his courage in the battlefield. And this young soldier said to his people: Let’s march with the pace of victory until the end.

So today, I say to you: We will stand behind Maryam because she is our best leader and we will march with the pace of victory until we plant the banner of gender equality in the Freedom Square of Tehran.