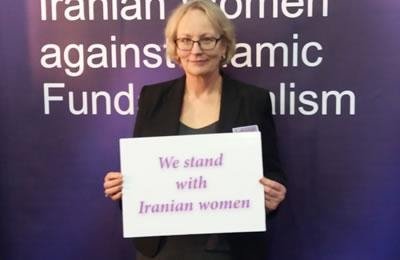 Thank you to all of you. You don’t actually know who I am because unlike all of these other venerable speakers today, this is the first time that I have had the honor and the pleasure of coming to address you.

You don’t know who I am, but I surely know who you are because for the last 8 years as a member of European Parliament, with my old friend and colleague, Struan Stevenson, I have understood all of the intricacies of Camp Ashraf and I want to just use this little opportunity to pay tribute to him because he really has brought your plight to the majority of the European Parliament. So, I am very pleased to be able to join you here in Tirana. My principal interest is the struggle for equality and respect for women all over the world. So, I was very happy to accept the kind invitation to come here today to your conference for International Women’s Day.

I know that I don’t have to tell any of you about the appalling state of the women in Iran. You know only too well. But please indulge me if I just use this little opportunity for my video to use it so that I can spread the words much more widely after the conference. Over the past 38 years, the Islamic fundamentalist regime in Iran has consistently denied women any rights by imposing misogynist… laws. Thousands of women have suffered arrest just because they are perceived to be incorrectly veiled, not covering their hair. This situation is a very long way from the egalitarian future that so many Iranian women believed they were marching towards during that 1979 revolution. They had no idea that they had been installing an ayatollah who would take them back to the middle Ages.

Since then we have seen a constant battle against a cruel, totalitarian regime. Much of what happens to women in Iran goes unreported. Atrocities against women take place behind closed doors in primitive cells. We know very little about their conditions but we hear repeated stories of young women giving birth alone without any medical support or the comfort of their family’s love.

As a mother that thought never fails to bring tears to my eyes. But you know these women don’t need my tears. What they need is my action. How can we in the European Parliament help bring the details of their plight to our government? How can we help to encourage in the demand that our governments take notice that they take action that they do not tolerate such abuse in the name of diplomacy? Why do we continue to search for moderates within this regime?

Rouhani came to office nearly four years ago and he was hailed as a moderate by many. OK, that term is always relative. But… we have seen over 3000 official executions. Who knows how many unreported?

This brings the total number of executions to over 120,000. That’s one-third of them were women. More women have been executed in Iran than in any other country.  Iran is now ranked 139 of 144 countries in terms of women’s rights.  Of course everybody here knows that but it’s my job and the job of my colleagues who have come here today to spread that word more widely.

Maryam Rajavi, the president of the National Council Resistance of Iran is a great woman.  She has led her organization in putting together a ten-point plan. This action is for Iran. This would sweep away the unfair and discriminatory Constitution.  Most important is the clear demand for free and fair elections with universal suffrage.

Women are a positive voice for change. They all need our support. So I’m going to go away from here today having enjoyed this amazing feeling here. It is very uplifting to see how committed you all are under the enormously difficult circumstances that you have all experienced… And I’m going to bottle that little bit of feeling and take it away with me and try and make sure that certainly in my country and in the rest of the European Union people listen and people join you and help you and I hope as others have said to be there on the day when you’re able to go back to Tehran.