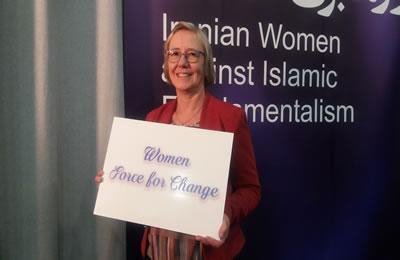 Excerpts of remarks at the IWD 2017 gathering, “Women in Political Leadership”

First of all, I want to thank the Women’s Committee of the National Council of Resistance of Iran for inviting me and giving me the opportunity to meet the people of Camp Liberty, in particular, the women who have been welcomed here in Albania.

Yesterday we had a great opportunity to meet nice women and I was very impressed to talk with women who already had a great experience of the struggle but also with young women who even didn’t live long in Iran but were so committed and really determined to fight for a better future in Iran and they are the future of Iran.

I want to express my solidarity with the women in exile but of course with all the Iranian citizens who are fighting for a better future for their country. Among them are a lot of courageous women who already suffered in the Islamic jails, have been tortured and also condemned to death penalties although they were innocent.

Human rights situation in Iran under Rouhani has deteriorated. Even after the nuclear agreement, nothing has changed in a sense of progress for the rights of the people. Since Rouhani came to office four years ago, some 3,000 people have been executed including political dissidents of ethnic and religious minorities. And these are official figures but we know they are maybe even more.

Women are the prime victims of the misogynist regime ruling Iran. They are denied by the regime of their most fundamental rights. They are discriminated at all levels of society. When they are working, they get low wages and 80 percent of the women are unemployed although they are well-educated. And they cannot access to a lot of functions. A society which excludes half of its people, that means the women, is not a sound society.

Despite civil repression and discrimination against women in Iran, they have played a role in the resistance against the regime. Women in Iran are defying the theocratic regime in every aspect such as their social life in universities, in the work places, and so on.

But the most remarkable aspect of Iranian women’s defiance of the regime is their participation in the resistance. You can be very proud that some 52 percent of the National Council of Resistance of Iran are women. By comparison, if you see Switzerland which is a so-called developed country, we are only 32 percent represented in the parliament. That means that also in our country, we have to fight to apply our rights. There are rights in law but there are the rights in fact. And for women, nothing is ever granted and we see in a lot of countries that if we think that everything is done it’s not true and then we always have to fight against backlash. So, the Iranian women have understood that but it’s also an example for us in Europe.

And the President-elect of the NCRI is also Mrs. Maryam Rajavi who is also the leader of the People’s Mojahedin Organization of Iran, the largest Iranian opposition movement. So, it is time for the people in Iran to get rid of all these oppression in order to settle a democratic regime where equality between all citizens, women and men, and between all religions and ethnic communities is the rule.

Iran also needs international solidarity and it is our duty in Europe to spread information throughout the world about what is happening in Iran. I would like just to quote a saying of the famous Burmese leader, Aung San Suu Kyi, who used to say to the Western countries, “Use your freedom to promote ours.”

Once more, thank you and congratulations to NCRI for all its courageous commitments, the militants, and also to their leader Mrs. Maryam Rajavi.