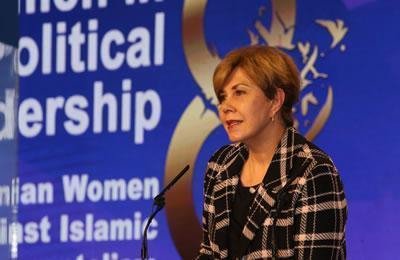 White House Director for Public Liaison (1985), US expert to the UN Human Rights Sub-Commission (1992-1996), Chair of the Center for Equal Opportunity

I must tell you, this is an extremely humbling experience. As I watched Madam Rajavi, in particular, as she entered the hall, and I listened to the musical accompaniment which at least in my country is known as “Beethoven’s ode to joy”. And that is the most appropriate introduction because there is no measure of joy that describes the joy of seeing all of you here safe, no longer under attacks by rockets, no longer everyday wondering whether or not you would have clean water and health facilities but here, safe and sound.

And I think we all owe a debt of thanks to the government of Albania for stepping in and taking into their heart all of you who are here. I think this is something we cannot repay.

But I have to say that the second song that we heard from the chorus of Albania is a tune that is very well known in America because it was the anthem of the civil rights movement and that is, “We Shall Overcome”. The fact is you are here but there is much to overcome and you are the very people who can lead the Iranian people and overcome the oppression that has been a fact of life in Iran for decades now.

Under the leadership of Madam Rajavi, you are the future of Iran. I think that many people do not know your organization; many people do not know what it is that you believe, but I have gotten to know you over many years now, and realize that what you stand for are the very ideals of liberty and freedom and democracy that all human beings want for themselves and which will in fact be the best guarantor of peace throughout the world.

What Madam Rajavi has put together in her ten point plan which calls for an independent judiciary, freedom of the press, absolute equality between men and women, a separation of religion from the state; all of these things are the necessary building blocks of democracy and freedom, and those of us as I do, who live in a country where we have those freedoms, sometimes take them for granted but you do not. And it is your job, it is your future to help bring those freedoms to those people who are still under the ayatollahs in Iran and who threaten not just the Iranian people but threaten all people in the world.

It is important that as we look at this conference and as we celebrate the idea of women and women’s leadership that we not forget, that in Iran, women are not just second class citizens, they are treated almost as if they are subhuman. They are not thought of as part of human kind and we must have a regime there that recognizes the human rights, the human dignity of all people, regardless of their gender, regardless of their beliefs and that we must, we must fight for this, and what we are, who live in countries like the United States can do to aid in that process is to call out the Iranian regime.