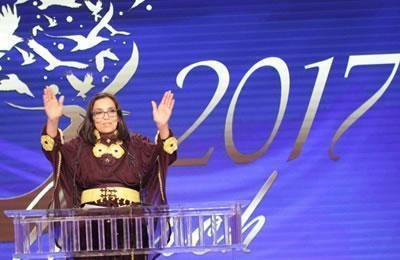 In the name of God, the most passionate, the most merciful

Women of the world in this continent and this part of the Earth,

My dear sisters and brothers in the Iranian Resistance,

Please accept the greetings of a sister.

I bring you the love of the people of Morocco who value your work and have faith in your struggle.

I would like to hail all the women of the world in all continents on the occasion of March 8, the International Women’s Day. And I hope that every year proves to be better than the previous one. I congratulate you on the occasion of the Women’s Day and the fact that you have chosen to have a woman leader. This is a valuable work. I congratulate Mrs. Maryam Rajavi and all the sisters in the Iranian Resistance who have fought for nearly four decades against a religious fundamentalist regime. Tens of thousands of these women have sacrificed their lives in this path. They have made remarkable achievements with regards to the equality between women and men in their movement.

Yesterday, I tried to tour Tirana. I approached the people. I found them very generous. They have suffered a lot under tyranny and colonialization. This is why their positions and their endurance today alongside the Iranian Resistance is never going to be forgotten. This is a courageous political undertaking in the international arena.

Yesterday, I bought a traditional Albanian dress which is called Jeligheh. This was my initiative as a Moroccan woman to wear this dress in my country and be a good will ambassador for your country.

Previously, I was Morocco’s Education Minister and I witnessed the sufferings of women with regards to education and they did not enjoy equal rights in society. Everywhere, women are victims of violence, while defending women’s rights is an important part of defense of human rights.

The strongest weapon tyranny, violence and oppression deprive women of are education and awareness. In light of its basic role, attending to women’s situation in Morocco is a continuous preoccupation. Morocco has adopted a series of decisions and undertaken measures on the legal, institutional and government strategic levels, civil complexes and general policies to promote the principle of equality and humanitarian justice.  But I don’t say that this much is enough and all the problems have been resolved. We still have a long way ahead of us, you and even women of France, Germany and Sweden. Because only in March, a small percentage of women have been allowed to hold positions of responsibility. This is while the present Constitution says that women’s participation in positions of responsibility should be 50%. There is a big difference between what has been written in the Constitution and what is being done in reality.

You spoke of one thousand women who are here. I tell you, that you have been able to win the hearts of men, (two) thousand men who are present here, those who are outside Albania and outside Iran, and those who are in Iran and everywhere in the world. We have put behind us the talk of women’s equality in the beginning of the third millennium. All the international laws acknowledge that women enjoy equal rights and like every man they have responsibilities. Yet, today, we are struggling to make these equalities stable and exchange views. Our struggle is to give depth to these laws. Today, I ask how is it that when we need women’s votes in the elections, parties appeal to women, follow them, and plead to them. But when it gets to their candidacy and their role in decision-making bodies, they close the door on them. Women are fought back by men and sometimes even by women.

In my view, the issue of education is about culture and how to raise children. We must be armed and women must be armed with the greatest weapon that is education. Lack of education is abused by darkness, ignorance, violence and destruction in wars. There is a basic consideration that the role of women in the elections is greater than their role in becoming a candidate. Nevertheless, polls indicate that there have been some improvements and progress.

Women continue to face serious issues that obstruct their growth alongside men. The issue of safety and security of women, the issue of stability, internal conflicts, fundamentalism, poverty, displacement, anxiety, ignorance of women, racial discrimination, etc. We must put an end to all these. To say that this is American, the other is African. That is Kurd and this is Arab. This is black and that is white. This is Muslim and the other is Jew. We must confront every form of discrimination and racism. But with regards to the clothing of women, you sisters and brothers very well know that it is one of the rights of women. The scarves that you wear is considered a covering and it indicates that women own one of their rights. The covering that we combat is the cover of darkness and ignorance, it is the mandatory veil.

No longer is there any dispute about women’s participation, but the issue is one of the main conditions of building a society, equality and law and order. What have we achieved so far? In the East, we have returned to the era of ignorance. Girls are threatened and women remain under rubbles. What have been the achievements?

The situation has even changed. There have been regressions in humanitarian principles and values and in the genuine Islam. This is tyranny, this is selfishness, and profiteering. Tyranny and ignorance in various religious, economic and cultural forms must be eliminated, so that there would be the opportunity to rise up against it and there would be change. Women’s struggle is not intended for women to turn into men. We do not want to become men but we respect you men who are standing before us because we are struggling for a common cause. Unfortunately, there are men who are terrified by the leadership of women like Maryam Rajavi because she jeopardizes the ruling tyrants and on the top of them, the mullahs’ supreme leader in the presidential elections.

Your power is not in your being Resistance combatants. You resist. You do not want to take advantage of anything or any party in Iran. You do not want to see the great country of Iran disintegrated. You want independence for Iran not discord among people. You are fighting for the country, its freedom, dignity and democracy. The mullahs must choose and decide whether to be the head of a respectable state or to be a king. In both cases, they must yield to the people’s will and implement democracy like other respectable kingdoms and republics. Aside from being a republic or a kingdom, the necessary condition is to respond to the needs of people and respect their will, and not by resorting to terrorism and threats, practices which have been common so far.  In fact they must create trust among people which is the lowest level of human justice.

Naturally, the people of Iran will not find any leadership better than Maryam Rajavi for Iran. The mullahs do not want to be a powerful and popular president or king. They want to be the shadow of God on Earth and of course, this is completely contradictory to the principles of Islam and does not comply with international laws.