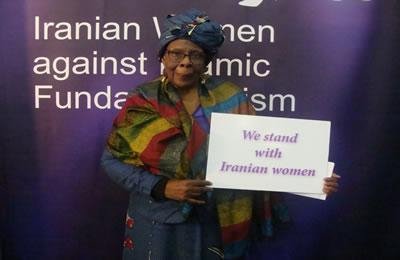 Master of ceremony, Madam Linda Chavez, allow me to begin my solidarity message from Zimbabwe from Africa by thanking Madam Rajavi for providing a new platform for solidarity to really take another form where we who are in struggles all over the world can also learn that it is doable.

Madam Rajavi thank you very much for this platform.

I would like to thank the women of the NCRI for inviting us from Africa to participate in this. It is very much a learning term for us because last year, for the first time I heard about Ashraf and I took a suitcase from Ashraf and Camp Liberty back to Zimbabwe which I have come back with and I explained to people in  Zimbabwe in different platforms in Africa about Camp Liberty and what was happening there.

And it is really a pleasure to come here and actually see the people who have been able to come. Again Madam Rajavi thank you very much for the headway to ensure that people are here and safe.

We would like to add our thanks to the people of Albania for receiving this special community to be at home in this country.

And I am sure they will actually usually give one and other psycho-social support and care to heal in Albania. To the government of Albania thank you very much for this most humane action on behalf of all humanity. You’ve done it for all of us. Thank you.

I would like to really say also that 43 years ago I came to Albania as a young woman to train under the previous Albania.

And we were really struck by the poverty here and we went back home very upset that we had been in a country like this. When we landed today in Albania may I congratulate the current Albania government for uplifting the country to where it is a new country now and it really was such a pleasure to arrive. Congratulations Albania!

I’d also like to say in our country, in our culture, rain is a good omen. When I arrived it started to rain and I knew that it’s a good omen for the Iranian struggle and for Albania.

I just really want to say now, I also have a very emotional coming together with (my) colleagues from Spain. We had one of the best ambassadors in Zimbabwe and she unfortunately died in a car accident and left us all wounded and it’s really such a pleasure to meet this sister here who has just spoken and to say to you by your coming in the British sister and the American one, I think we have some windows where we can now take this Iranian struggle to a higher level together because in Africa we will need both legs to actually ensure that the struggle is well-known and supported. So it is really a pleasure to meet you.

To you, the one thousand members of the Iranian resistance who are here, and the 2000 men who have come here I would really like to say you are such a great inspiration and we will build on what you have actually gained. The victorious relocation from Camp Liberty to Tirana is because of the resistance of members of the movement. The fourteen-year-old leadership at Ashraf and Liberty, and President-elect Mrs. Rajavi, her courageous is solution. Today you are here as your movement and the resistance all together have united to ensure that you really do get here in safety. I think the men who are present here, who have helping us and serving us, I really wish I had someone from Zimbabwe, a man, to have a look at what other men can do. So all the men here, thank you very much. You have really inspired me.

I would like to express our solidarity as the stalwart of the anti-apartheid movement without which we would not be free today, in southern Africa.

And I’m sitting right next to one of the old stalwarts of the anti-apartheid movement. And again I’ve got somebody that I know we can think through how we can take this thing forward with the Iranians provided with a platform which we should build on.

I want to say why the anti-apartheid movement was inspirational; your movement is actually even more inspirational because it is building on a higher level of this struggle.

This year is the tenth year of our torture made to our death in Zimbabwe. We were tortured on the 11th of March 2007. This year is the tenth year. And we get something called the anniversary syndrome which this year started a bit earlier. In here, I think it’s very healing because of the way that you have organized yourselves. And I want to conclude by saying, this is really the next phase for the movement of solidarity. I think that I want to say we stand with you Madam President-elect Mrs. Maryam Rajavi. Truth has long legs, (it is an) African saying. Lies have short legs. Mrs. Rajavi you not only speak with truth, you reflect the truth.

I know that we will meet in Iran, sooner than later under your presidency.