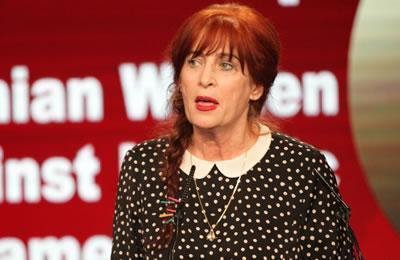 I will greet in Albanian because I am an Albanian, so you will understand better in Albanian language than in English.

I am the head of a Peace Advocacy Committee and we have ratified a declaration that invites all the countries of the world to sign it, in order to put an end to wars and establish peace. It might seem like an illusion, but it is not; it’s a strategy, a plan and we should work with a plan in order to walk together towards a peaceful world, because we only live once and we should live in peace.

The movement that is run by Mrs. Rajavi inspires me and I am also inspired by her courage and superiority. I am also shocked by the fierceness of fundamentalism that along with the economic power of a country like Iran, has even the power of such an “old” fundamentalism, that seems as though has come straight from the Medieval Ages.

And a woman, the symbol of such a movement that fights for equality, is a person that must be admired, supported and shown solidarity to.

In 2013, we were only a few people from Albania, Drita and I. Since Drita is the director of Emigration in the Western Balkans, she welcomed the first 200 PMOI, leaving prejudice aside that existed not only in Albania but in all of Europe. She overcame those obstacles and made it possible, along with the Albanian government, and the PMOI came here. Today, there are no longer 200 PMOI, but there are more than 3000. Of course, this is the merit of the current and past governments, the activists and of all of us. We were able to show that we welcome people that are suffering.

Because of the job that I have, it happens that I cry and rebel every day, because I work with the poorest people, with those who suffer. I cried a lot when I listened to the stories of Iranian women. But now I don’t cry anymore. I want to be strong, because only in this way we will be able to change the situation. If we join together to fight not only for the 8th  of March, but to tell the world that we are here, then we would celebrate a different 8th of March in a free Tehran. Thank you!