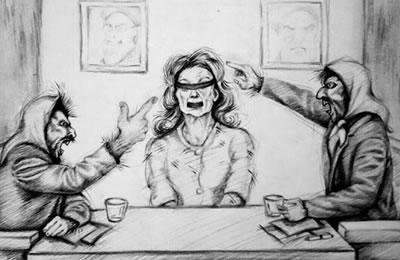 Former political prisoner and cartoonist Atena Farghadani published a new drawing on the occasion of the International Women’s Day. Ms. Farghadani thus depicted subjugation and humiliation of Iranian women justified under the pretext of enforcing the mandatory veil.

Atena Farghadani is a cartoonist and a children’s rights activist. She was arrested first on August 24, 2014, and incarcerate in the Evin Prison. She was charged with anti-government propaganda and insulting the regime’s officials and leaders. She was finally released from prison on May 3, 2016.