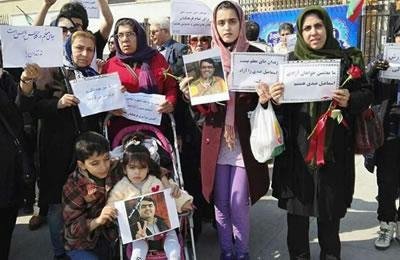 Iran: Women teachers take part in protest with their children

Women joined in large numbers a demonstration on March 9, 2017, by teachers and other employees of the Education Ministry in front of the parliament in Tehran. They came with their children from Tehran, Karaj, Shahriar and Qom.

The State Security Force attempted to disperse the demonstrators and prevent it from spreading by making threats. They did not allow anyone to take photos or shoot films from the demonstration. The internet access in the area and its periphery was disconnected.

In addition to Tehran, teachers held similar demonstrations outside the departments of education in 28 cities across the country, including the major capitals of Shiraz, Mashhad, Rasht, Qazvin, Tabriz, Isfahan, Ahwaz, Sanandaj and Shahroud.

Iran: Workers stage protest with their wives and children