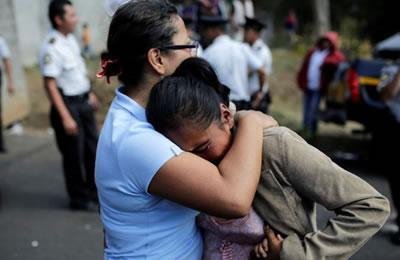 Girls burned to death at Guatemala shelter ‘were locked in classroom’

France 24, March 9, 2017 – The blaze that killed at least 34 girls at an overcrowded Guatemalan shelter for abused teens broke out in a tiny room in which they may have been locked in to control them after a riot at the center, authorities and witnesses said on Thursday.

The inferno in the 16-square-metre classroom packed with 52 teenagers left survivors of Wednesday’s blaze with such severe injuries that burn specialists were flown in from the United States and medics said they needed hundreds of blood donors.

An initial hypothesis by human rights prosecutors suggested teens in the center started the blaze early Wednesday (March 8) by setting fire to mattresses during a lockdown, ordered after a group of more than a dozen youths reportedly ran away on Tuesday.

An investigation is under way to determine the exact circumstances and attribute criminal responsibility.

The government has sacked the director of the Virgen de la Asuncion home, temporarily closed the center, declared three days of mourning and vowed to reform a childcare system that experts say is critically underfunded.

Iran: Woman sets herself ablaze at a gas station