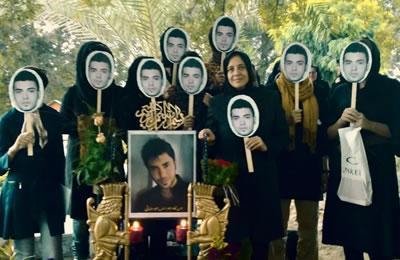 The Intelligence Department of Mazandaran (northern Iran) summoned and gave warning to a bereaved mother over holding memorial ceremony for her murdered son.

Intelligence Department agents summoned and warned Mrs. Houri Golestani and her relatives against holding any memorial ceremony for her son, Behnoud Ramezani, otherwise all the participants would be arrested.

Behnoud Ramezani, 19, was a first-year student of mechanical engineering at the Noshirvani University of Babol. He was killed by security forces during the Feast of Fire in 2010, in Tehran’s Narmak Square.

A family friend said, despite passage of six years, Behnoud Ramezani’s family have not been allowed to hold any memorial service for him.

In March 2012, Behnoud’s parents and aunt were arrested for attempting to hold a ceremony for him. His parents were sentenced to 8 months in prison and his aunt to four months.