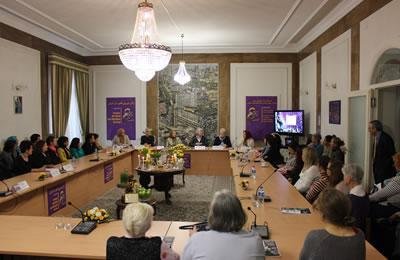 The NCRI office and representatives of the Iranian Resistance observed the International Women’s Day on March 16, 2017, in the company of a number of German members of parliament, personalities and women’s rights activists as well as representatives of Iranian women’s associations in various states of Germany.

Dr. Massoumeh Bolourchi, NCRI representative in Germany, opened the IWD conference by underscoring the fact that women’s participation in all political leadership levels of the movement has the new message of democratic change in Iran. She stressed, “It is our pledge and our responsibility to realize freedom and democracy in Iran which will in turn guarantee peace in the region and the world.”

Ms. Katharina Landgraf, MP and vice-president of women’s group in the Christian Democratic Party, congratulated the successful relocation of PMOI members from Camp Liberty to Albania and other European countries and stressed, “We should not be satisfied with what we have gained. We must preserve these achievements in a network of women and we must not allow anyone to break up our ranks.”

The NCRI Women’s Committee Chair Sarvnaz Chitsaz focused on women’s active participation in confrontation with the religious fascism ruling Iran as a major change which set the corner stone for the Resistance against the regime.

Ms. Karin Halsh, member of the board of directors of the Parliament of Berlin from the Social Democratic Party, congratulated the Iranian Resistance for the successful relocation of PMOI members and particularly women from Iraq. She lauded the movement’s efforts over the past years and the achievements made so far, and expressed hope that more people would join the movement and endeavor with all their power to liberate Iran. Ms. Halsh reassured the movement of her continued support.

Hille Gosejacob-Rolf, executive director of the German Committee in Solidarity with a Free Iran, and honorary president of the Social Workers’ Syndicate in Germany, said the Iranian Resistance movement has been effective and efficient in its struggle against the regime and urged support for Maryam Rajavi’s 10-point plan for a free Iran.

Representing the PMOI’s Central Council, Azar Akbarzadegan stressed that the movement’s vanguard women have overcome numerous obstacles in their steadfast struggle against the mullahs’ religious tyrannical regime. “The dedication and devotion of these women will topple the clerical regime and bring freedom, democracy and equality for the oppressed women and people of Iran,” she vowed.

Representatives of Iranian women’s associations in Bonn, Baden-Wuerttemberg, Niedersachsen, Berlin and Hamburg also addressed the conference, explaining their experiences of suppression by the regime in Iran and their pledge to continue to support the Iranian Resistance.