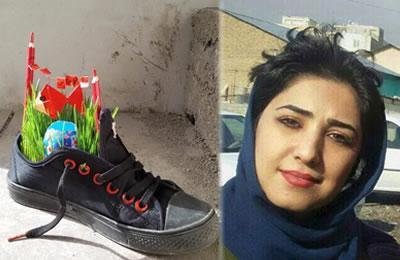 “In Nowruz 2015, I was in solitary confinement but in Nowruz 2016 I was in the Women’s Ward of Evin and I decided to grow grass in my shoe. The seeds sprouted and grew. Some of my cellmates said when they looked at the shoe, they gained strength as if there was energy of life in that shoe.

“A few months after I came back home, my mother said don’t wear this shoe any more… or throw it away because it is too old!”

“I told her: Even if this shoe is tattered and torn, I would patch and wear it… Because every Nowruz I remember all the political and apolitical prisoners and I decorate my steps with green grass until the day of freedom.” (From Atena Farghadani’s Facebook – March 21, 2017)