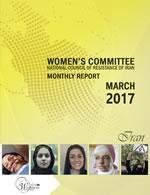 The month of March marked the International Women’s Day.

The Women’s Committee of the National Council of Resistance of Iran held a number of meetings in various cities in Europe, U.S., Canada and Australia in coordination and cooperation with Iranian women’s associations to honor the International Women’s Day.

The main event was an international conference in Tirana, Albania featuring a number of prominent women from various countries, the Iranian Resistance’s President-elect Maryam Rajavi, and a large group of PMOI women who have been relocated from Camp Liberty in Iraq to Albania.

In Iran, prisoners at the Women’s Ward of Evin honored the day by holding a ceremony, reiterating the need for women to enjoy equal rights and fundamental freedoms in society.

In a speech on March 19, the mullahs’ supreme leader Ali Khamenei once again stressed that the main duty of women is bearing children. He said that the equality movement is a source of corruption. (Khamenei’s official website, March 19, 2017)

The clerical regime continued to suppress women. Two women were hanged in Rasht on the eve of the International Women’s Day. Imprisoned women were denied medical treatment and leaves. Women were arrested in private parties and in the traditional Fire Festival. The state-run media put the number of arrested homeless women in Tehran at 2052.

Two women were executed this month on March 4, 2017, in the Central Prison of Rasht. With the execution of these two, the number of women executed during Rouhani’s tenure reaches 75.

Marjan Davari, a 50-year-old researcher and interpreter, was sentenced to death for translating philosophical books. She has been convicted of “corruption on Earth” and “association and collusion against the state.”

Security forces attacked the residence of political prisoner Afshin Sohrabzadeh on Wednesday night, March 15, 2017, and badly beat up her mother. According to the latest news, Mr. Sohrabzadeh’s mother was hurt in the head.

Kurdish student activist Afsaneh Bayazdi has been sent into solitary confinement in the wake of writing a letter to Ali Khamenei, the mullahs’ leader, protesting insults, brutal torture and rape in prisons.

Ms. Bayazidi was interrogated and badly beaten up by authorities of the Central Prison of Kerman. Afsaneh Bayazdi, Kurdish student activist, was sentenced on September 8, 2016, to four years in prison and internal exile to Kerman for disseminating propaganda against the state.

Prisoner of conscience Elham Farahani has been denied access to physiotherapy after she broke her arm and was operated on twice.

Elham Farahani, 54, is a Bahaii serving her four-year prison sentence in the Evin Prison. She and her husband and son are imprisoned for their faith.

Christian prisoner of conscience, Maryam Naghash Zargaran, is presently in dire conditions suffering from severe physical weakness and weight loss. She is denied badly needed special care due to the heart operation she underwent last year. Ms. Zargaran has been imprisoned since July 19, 2013, for disseminating propaganda against the state.

Civil and human rights activist Atena Daemi and her two sisters, Ensieh and Hanieh, were summoned Sunday, March 12, 2017, to the Quds Judiciary Branch to be informed of their charges.

Fereshteh Arghavani, 52, was arrested and sentenced to one year in jail for contacting her brother who has lived abroad for 35 years.

She is presently detained in a prison in the Tirkala village of Sari, capital of the northern province of Mazandaran.

1087 female beggars and 2052 homeless women have been arrested since March 2016. This was announced by an official from Tehran’s Governor’s Office. (The state-run Alef website – March 20, 2017)

Six young men and eight young women were arrested in a private party according to the deputy chief of the Staff of Enjoining Good in Sepidan (southern Fars Province) who announced the news on March 2, 2017.

The State Security Force of West Tehran raided a women’s party and arrested a number of women. (The state-run Fanous News website – March 4, 2017)

The State Security Force’s Police Chief announced at a news conference on March 15, that 48 women had been arrested during the Fire Festival on Tuesday night, March 14, 2017. He said twelve of those women were turned in to a judge and the rest were released after signing papers. (Shabestan state-run news agency – March 25, 2017)

Sima Kiani was arrested by security forces on Wednesday, March 8, 2017, in Shahr-e Ray, a Tehran suburb. She was transferred to an unknown location. Security forces inspected Ms. Kiani’s house and confiscated many of her personal belongings. Ms. Kiani adheres to the Bahaii faith.

Four Christians including two women were arrested by security forces in Tehran and Orumiyeh. The two women have been identified as Nana Badrian and Anousheh (Veronica) Rezabakhsh.

Ms. Badrian and her husband are from Tajikistan. She was arrested on January 23, 2017, and taken to solitary confinement in Ward 209 of Evin Prison for interrogation. There is no information available on them.

Mrs. Anousheh Rezabakhsh and her son were transferred to a detention center on February 20, 2017. There is no information available on them, either.

Lisa Tebyanian was arrested on March 15, 2017, by security forces of the Province of Alborz, central Iran. The security forces also inspected the residence of this Baha’ii woman in Karaj and confiscated her personal belongings.

In another development in Tehran, another young Baha’ii woman, Afrouz Zabihi, was deprived of continuing her higher education.

Ms. Zabihi was a third-year student of Civil Engineering (construction) at Tehran’s Beheshti University and had already passed 90 units. She is a talented student who has won various awards.

Freshman student, Niloufar Moussavi, was expelled from Payam-e Nour University in Qazvin at the end of the first term exams, for her adherence to Baha’ii faith. Ms. Moussavi was studying English Translation at this university.

Institutionalized discrimination and repression against women in Iranian society has led to their deprivation of social support and consequently, numerous social disasters. Last month for example:

799 female high school students have been identified across Charmahal-o Bakhtiari Province (southwestern Iran) who did not continue their education in the 2016-2017 academic year. This was announced on Tuesday, February 28, 2017, by the general director of the province’s Education Department. He added that 218 of these girls, i.e. more than a quarter, have dropped out of school because of early marriages.

Fatemeh Daneshvar, chair of the social committee of Tehran’s City Council, announced on March 8, 2017, that babies who are born premature from street women are smuggled to other countries to be sold. Daneshvar said, “This gang sells baby girls for a price higher than boys and sends the babies to unknown destinations.” (The state-run Rokna.ir, March 8, 2017)

The charred body of a young woman, a teacher, was found in the mountains of Ramhormoz, in the southwestern Khuzistan Province, on February 27, 2017. The woman was identified through her mobile to be Zeinab Beziyoun, otherwise her body had completely burned. Her body was found by a shepherd on the top of a mountain. It is not clear who committed this atrocious crime and why.

The widow of a Revolutionary Guard killed in the Iran-Iraq War, set herself on fire on March 5, 2017, outside the Martyrs Foundation in Tehran.

The woman participated in the protest gathering of war veterans on March 4, 2017, in Taleghani Street of Tehran. The woman’s face and hands burnt seriously and she was hospitalized. (The state-run ghanoondaily.ir, March 5, 2017)

Two women, one of them pregnant, were splashed with acid in the same week in the Petroshimi Park in Mahshahr, southwestern Province of Khuzistan. (The state-run Fars news agency – March 19, 2017)

Wednesday night, March 8, 2017, a ten-year-old girl, identified as Shadi M., hanged herself in the town of Takab, near Orumiyeh, capital of West Azerbaijan Province.

A young woman set herself on fire at a gas station in Galikesh, northern Golestan Province. (The state-run Rokna.ir, March 11, 2017)

Iranian women held and participated in various protest demonstrations to demand their rights or protest the regime’s policies in different areas.

Women teachers actively participated in demonstrations in more than 20 cities across Iran on Thursday, March 9, 2017and protested the deprivations and restrictions imposed on them in their jobs.

Also, hundreds of female teachers and staff of the Education Ministry staged a protest outside the mullahs’ parliament in Tehran at 10 a.m. on March 9, 2017, demanding freedom of imprisoned activists, balancing of their salaries and insurances, and elimination of discrimination.

Many women had brought their children to the demonstration. Participants held placards which read, “Free all imprisoned teachers”, “provisions=1%, hunger=99%”, “efficient insurance is our right”, “poverty and discrimination is enough”, etc.

Thousands of female teachers and retirees staged protest demonstrations on Sunday, March 12, 2017, in Tehran and other cities. Participants in these gatherings demanded that their salaries be balanced, insurance services for the retired be increased and their living conditions improved.

Saturday evening, March 4, 2017, girl students of the school of literature at the Allameh University in Tehran staged a protest gathering.

They protested the measures by the university’s security department (Harassat) to segregate the school’s entrances, as well as their illegal and unsuitable treatment of students.

The families of political prisoners massacred in summer 1988 commemorated their loved ones on the last Friday of the year, March 17, 2017, according to an Iranian tradition. Ms. Mansoureh Behkish who has lost five of her siblings and an in-law in the course of this massacre, wrote about the ceremony.” Security forces did not let the families to lay flowers on the soil, water and clean the place. So, we put some flowers in the barbed wires in the memory of our loved ones and the mothers who are no longer among us.”

The Intelligence Department of Mazandaran (northern Iran) summoned and gave warning to a bereaved mother over holding memorial ceremony for her murdered son. Intelligence Department agents summoned and warned Mrs. Houri Golestani and her relatives against holding any memorial ceremony for her son, Behnoud Ramezani, otherwise all the participants would be arrested.

Behnoud Ramezani, 19, was a first-year student of mechanical engineering at the Noshirvani University of Babol. He was killed by security forces during the Feast of Fire in 2010, in Tehran’s Narmak Square.

A young woman, Soheila Moloudi, 31, died on Sunday, February 26, 2017, in Marivan’s Bou-Ali Hospital (Iranian Kurdistan), during C-section operation due to the doctor’s mistake. The people of Marivan staged a demonstration in protest to the hospital’s inefficiency.

Iran: Woman political prisoner deprived of her right to appeal