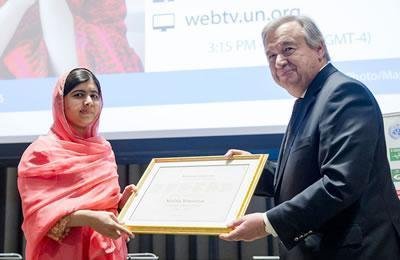 The 19-year-old, who became the youngest person to win the Nobel peace prize in 2014, will take up the role with a special focus on girls’ education.

Accepting the accolade on Monday, she said: “(Bringing change) starts with us and it should start now. If you want to see your future bright, you have to start working now (and) not wait for anyone else.

“The extremists tried all their best to stop me, they tried to kill me and they didn’t succeed. Now this is a new life, this is a second life and it is for the purpose of education.”

Ms. Yousafzai, originally from Pakistan, was shot in 2012 by the Taliban for attending classes. She is the youngest-ever UN Messenger of Peace and the first one to be designated by Secretary-General Guterres since he assumed office in January this year.  She now lives in Birmingham, where she attends school, and remains a prominent activist for female education.

UNSG said in a statement: “Even in the face of grave danger, Malala Yousafzai has shown an unwavering commitment to the rights of women, girls and all people.

“Her courageous activism for girls’ education has already energized so many people around the world. Now as our youngest ever UN Messenger of Peace, Malala can do even more to help create a more just and peaceful world.”

During the presentation, Mr. Guterres described Ms. Yousafzai as a “symbol of perhaps the most important thing in the world – education for all.”