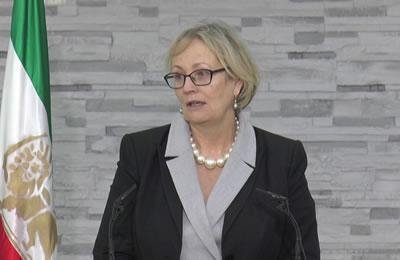 I am in an unusual position I think to some extent here, because I live in a country which has not been invaded for over a thousand years really successfully. Where we have had women’s suffrage for almost one of the longest times anyway in the world, not quite the longest. Where we have been free.

Freedom is relative. We talk about freedom as some sort of absolute; it’s not. It’s relative. It develops. Both as a concept and as a reality. And I think I’m free now. I come from UK. I have a European citizen’s passport. I’m about as free as anyone in this world can be, but I’m not entirely free. I’m not entirely free of my history, my family ties, my cultural mores, these are things which affect, in some senses restrict me and in other senses liberate me.

We all live in slightly different circumstances. And when I look at the experiences and the circumstances of so many of you and when I look at the pictures of those who have died, and I look at the faces of those who have survived I recognize that my experience is pretty limited, not just amongst my Iranian hosts but also amongst my fellow travelers. We have Iveta from a part of Europe which until just over 20 years ago was also under a totalitarian dictatorship. These things are recent for so many of us.

So, we all come from slightly different perspectives and slightly different places but my perspective and the reason I make that point is just so you know how complacent I am as a Brit about my freedom. Because I take it for granted, absolutely. I take it for granted that I can say anything politically that I want to say so long as it’s not inciting hatred against somebody else.

So where do I find myself now? Well, I find myself in a world that looks to me like it’s changing. And one of the catalysts for that change is… And I thank Linda for what she just said because it so very nicely gives the beginning to what I wanted to say.

We live in a world where there are people looking around for excuses to hate, for reasons to build barriers.

Why do they want to do that? That really is the big question. What is their motivation?

I think it’s power, in the same way that the motivation of the mullahs in Iran is power, control and repression.

And I look around and I see that one of the reasons why people in the developed world are becoming easier to manipulate is because we’ve managed to create the hatred of Islam. And that’s why, dear hosts, you have an even bigger task.

You’ve got a big enough task taking back your country and giving your people back their freedom. But you have an even bigger task because you have a huge responsibility to show countries like mine that women in Islam have a place. They have a place at the top, at the leadership, at the cutting edge. They don’t have a place in subservience to men.

This is the only organization that I’ve met where that’s the case.

And yesterday when I asked why do you wear a scarf then? You have on your list that women should be able to wear what you like but you wear the same thing. It’s weird for me! I think why, why?

And the answer was, because this is a symbol of our resistance to those who say that we must wear it. I think that’s a marvelous argument and was very well put to me.

And I really salute you and I give you this extra responsibility that you not only have to free your own country and your own compatriots but you have to free the west as well from our complacency and our growing propensity to believe that Islam is bad.

So I would hope… I’m not proud of the way my country has treated your organization, but I would hope to be able to leave here today to work with others that I’ve met, to try and make sure that we send that message very clearly.

And that you ladies have a huge responsibility but I and many others are going to be here to support you in it. So, I can’t remember what the chant was but, go for it in English.