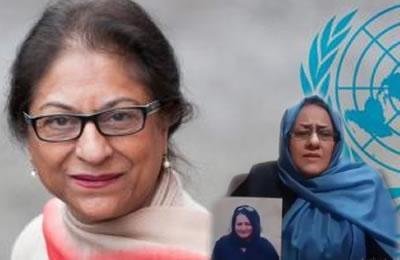 Ms. Massoumeh Nemati wrote a letter to the UN Special Rapporteur on Iran, Ms. Asma Jahangir, urging her to take appropriate measures to improve the situation of political prisoners in Iran.

Ms. Nemati is mother of imprisoned civil rights activist, Atena Daemi, who has been on hunger strike for 13 days in Evin Prison. She is protesting the imprisonment sentences issued for her sisters based on unfounded charges.

Ms. Nemati explained about the conditions of her daughter during two terms of imprisonment. The first time, she said, Atena was arrested in 2015 and held 90 days in solitary confinement and tortured under interrogation. The second time was in November 2016 when the Iranian Revolutionary Guards Corps (IRGC) fabricated false charges against Atena and her two sisters. The court issued three months of imprisonment for each of the three sisters, something that provoked Atena Daemi to start her hunger strike.

Ms. Nemati urged UNSR Asma Jahangir to undertake suitable measures to attend to the situation of political prisoners in Iran, including her own daughter.