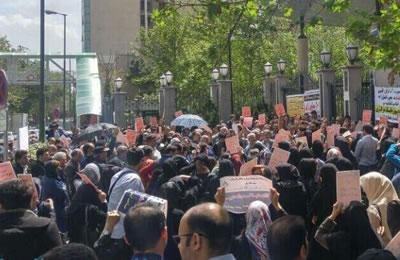 A number of women staged a gathering outside the Central Bank of Iran on Wednesday, April 19, 2017.  They thus protested to the Caspian Financial Institution which had failed to refund their deposits. Dozens of people participated in this gathering and chanted, “release people’s investments.”

The crisis involving the Caspian Institute has continued for five months.

On February 19, 2017, dozens of women who had deposited funds in the Caspian Credit Company, held a protest gathering in front of the regime’s parliament in Tehran.