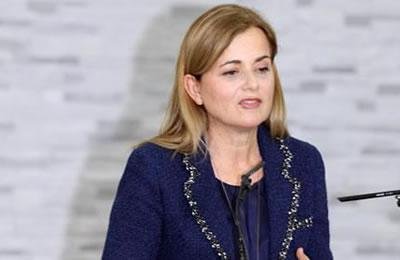 Human rights and protection of women’s dignity have priority and I am concerned about Europe’s ignoring them.

I also say good morning to you friends who are like sisters to us.

May be it is better to first express my feeling at this moment about meeting women who have been engaged in struggle for long years.

I must say that these days have been the most important and the most exciting days of my life.

I would like to speak about some duplicities, and some unrealistic and false statements.

How could this regime be still in power despite human rights abuses and all the existing evidences?

I think there are several questions that need to be answered. The Iranian regime relies for its survival on forces that prevent the world community from learning what is going on in Iran and why human rights are violated in that country.

There are factors involving the role the Iranian regime plays in the complicated circumstances of the Middle East, such as the ongoing tensions in Iraq, Syria, Libya and several other countries.

Each of these issues have their own different special characteristic which are significant.

There are also other factors such as the reservations western countries have had in dealing with this regime. There is the JCPOA according to which they claim Rouhani is a moderate. The agreement pursues nothing but economic interests and investments in Iran.

This is the factor that shuts the eyes of western powers on human rights violations in Iran.

And this is the situation of this land (Iran) in this century and the modern times.

Lies and denials is another issue I would like to discuss. I believe that in Europe and particularly in western countries we face a big lie.

I believe that some people are taking advantage of the diversity of cultures to justify blatant violations of women’s rights especially under the banner of freedom of religion. In this way, they justify their actions and legitimize themselves.

I believe that human rights and protection of women’s dignity have priority over such legitimacies and such religions. I am concerned about Europe’s overlooking and ignoring them and I believe that we will pay the price of it very soon. This is what we are presently paying the price for.

I also want to speak about several other instances of duplicity.

The social media offer this view that there is no alternative beyond a secular or religious dictatorship for the Middle East. I think this is not right and not true.

I believe that the PMOI and the Iranian Resistance movement have proven to us that there is an alternative that respects human rights. More importantly, this movement is organized and has popular support inside Iran.

The movement I got to know in 2013 is a wonderful equality movement led by women. This is a vivid reality that can be seen and felt very well in the exhibition.

The history of the Resistance movement indicates that women are powerful in this movement. This Resistance has a history of power and flexibility that shows it can be an alternative.

But this is not what the western mass media disseminate.

I would like to once again, thank Mrs. Rajavi and the Iranian Resistance for giving me this opportunity to assist a just struggle and stay with it until Iran is free.

In conclusion, I must say that whatever you have said in the past several years have proven to be accurate and true.