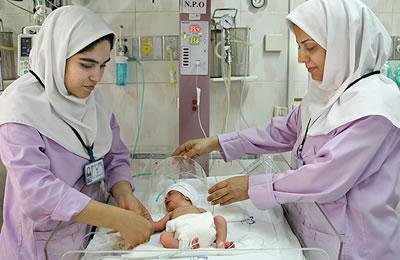 Fourteen nurses lost their lives last year due to job stress and pressure.

The state-run INLA news agency cited the Secretary General of the House of Nurses as saying that nurses can hardly have the advantage of early retirement and the bylaw on hard and harmful jobs is not implemented for contract nurses.

In just 40 days since the beginning of the Persian New Year, one nurse dies and another suffered cerebral hemorrhage due to stress at work.

Ali Mohammad Adabi, head of the Nursing System Organization, in an interview with the media revealed that 14 nurses had died over the past year. He said most of them were between 25 and 45 years of age who were under tremendous pressure at work.

Adabi claimed, “There is a general shortage of nurses in all hospitals, however this deficiency is more evident in the emergency rooms, the operation room and the ICU” where nurses are under a lot of pressure but receive small wages. (The state-run ILNA news agency, April 30, 2017)

Adabi’s comment on shortage of nurses contrasts his own remarks on June 24, 2016, when he said there are 40,000 nurses who have registered on the organization’s website for jobs but they are not willing to continue their services due to the absence of government support. In the same interview, he also noted the mammoth salary gap where the doctors’ salaries are 40 times greater than the salaries of nurses.