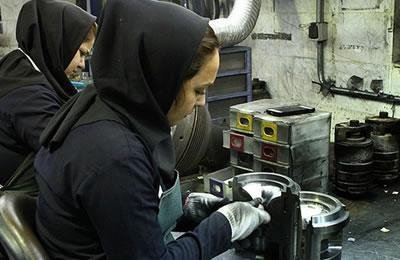 In Iran, however, the situation gets even worse.

While the minimum expenditure of an average family or the poverty line is 2.5 million toumans, the official minimum wage set by the Labor Law Council is 930,000 toumans, which is one-third of their basic needs. In many cases, women workers are paid less than one-third of the official minimum wage. (Vahideh Negin, advisor on women’s affairs to the Labor Minister, IRNA official news agency, April 21, 2015)

According to an activist for the rights of women workers, “female workers are the cheapest workforce in Iran.” (Akhbar-rooz.com, Haleh Safarzadeh, April 27, 2014)

The bankrupt economy has left no job security for workers. When a factory or production unit becomes insolvent, women workers are the first candidates for lay-off. In any slight crisis, women are the first victims who get fired from their jobs.

More and more employers have been firing married women and hiring single women in their stead because the former cannot work for them during maternal leave. Over the past 10 years, 74,000 women have been fired from their jobs after going on maternal leave. (Fatemeh Sadeghi, university professor, the state-run Fars news agency, June 16, 2015)

This is while gender discrimination is institutionalized in the law and all legislations are against employment of women. As a result, women who desperately need to earn a living for themselves and their families, are forced to accept any low-pay job with no legal backing, no remunerations, no insurance and no safety. The situation of women who work in small workshops is way much worse.

The primary problem of the majority of female workers is that they work in small workshops with less than 10 workers which are not under the jurisdiction of the Labor Ministry and the Labor Law and thus not officially supervised.

These women are deprived of their most rudimentary rights; their wages are far below the minimum wage set every year by the Labor Law Council; they do not enjoy maternal leave or childcare facilities; they work in non-standard conditions and are exposed to safety hazards; they work 10-12 hours a day and are subject to violence, including sexual violence, by their employer.

Over 90 per cent of workers in the carpet and rug industry are women, half of whom are young girls under 16 years of age. They work around 12 to 16 hours a day and more than 10 different respiratory, skin, bone and muscular diseases as well as serious headaches and eye problems have been identified as bring common among these young women.

There are no accurate figures available on the number of women heads of household, however, most of the female workers in Iran are heads of household. A considerable number of them have not married and run their family on their own. In some cases, they have children; in others, they have to take care of their parents. Until just a few years ago, some 300,000 women workers were covered by the Social Security Organization, but their number has plunged to 100,000 in recent years. (The state-run ILNA news agency, June 21, 2015)

According to Article 75 of the Iranian Labor Law, it is forbidden to give hazardous, difficult and harmful jobs to women or have them carry heavy weights with empty hands and without making use of mechanical instruments. Due to the horrible employment crisis and high unemployment rate under the mullahs’ rule in Iran, however, women have to accede to hazardous and difficult jobs.

Iranian women work in brick kilns, mines, tunnels, slaughter houses, welding, etc. with low wages even less than one-third of the official minimum wage. They are deprived of retirement benefits, vacations and remunerations.

Over 1,000 Iranian women work in the mines. 300 women toil in stone mines. Half of the brick-kiln workers are women.

Some women work up to 14 hours a day without any break in dressmaking workshops. Carpet weavers work around 12 to 16 hours a day but receive only 4 million toumans for a rug that sells for 25 million.

In contrast to such deplorable conditions for Iranian workers, and women workers in particular, the lion’s share of the Iranian economy including thousands of financial, commercial, manufacturing, and public services institutions have been monopolized by Khamenei and his Revolutionary Guards Corps (IRGC). For this reason, Iranian workers and women can have job and job security, decent wages, housing and insurance to provide them welfare only when the ruling religious dictatorship is overthrown and replaced by a democratic government.