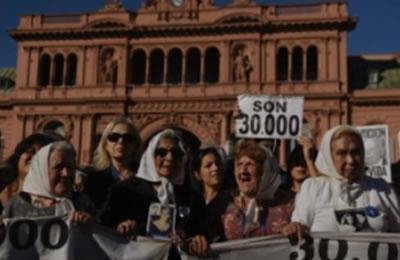 Mothers in Argentina march to remember, four decades on

Buenos Aires, AFP, May 1, 2017 — The Mothers of the Plaza de Mayo marked four decades Sunday of marching for accountability in the abductions of their kin by Argentina’s last dictatorship.

“Stay alert, Stay alert; they’re alive … the ideals of the abducted” and presumed dead, thousands of marchers in Buenos Aires sang in the square they helped make famous.

Out front was founder Hebe de Bonafini, now 88, her wheelchair pushed by activists, as onlookers jostled to get her picture.

The four-decade milestone found members increasingly frail but ever determined to see their children’s killers brought to justice.

Defying their advancing years, the bereaved mothers who make up Argentina’s most famous human rights group still gather every week in the square outside Argentina’s pink presidential palace.

After all these years they are still demanding answers on what happened to the children they lost during the country’s brutal military dictatorship.

The group was born on April 30, 1977, when 14 women gathered to protest the military dictatorship installed in a coup the year before.

They dared to challenge the regime at a time when repression was at its height.

They risked the same fate as their political activist children — torture, death or simply disappearing without a trace. Instead, the generals tried to laugh them off.

Some 30,000 people were abducted and presumed killed by the regime or right-wing death squads in the 1970s and 1980s.

About 700 people have been convicted of crimes against humanity from the last dictatorship’s era, most of them military brass. Some retrials are still under way.